​ Between 2008-2010, a number of groups mistook a man-made salt water flooding of the Tsawout lands, Puckle Farm, and the northwest part of the CRD park, as a salt marsh.
The cause of the salt water flooding was the failure of the flapper gate on the ditch system running through the Tsawout lands, which allowed sea water to flow up the ditch for more than 20 years from the 1980's until the present.  Repairs were made to the flapper gate in 2012 which partially closed the gate, but sea water still comes up, and is present in the Tsawout ditch system year round.

Precontact: This land was first surveyed in 1858, and the surveyor's notes described the land as low rush and grass bottom, and in several parts he made  reference to pacific crabapple trees.  There was no mention of water nor is there blue shading on the survey map, as the surveyor used to describe wet land on the other side of the ridge to the west.

Early settlors - good land  The flat land of Puckle Farm, which lay to the south of the Tsawout lands and ran to the sea, (most of which is now the north part of the CRD park) was described:
These three descriptions of the Puckle Farm flat lands as being good land, were all before any drainage was done to the land.   Clearly it was not a salt marsh when the first surveyor went there in 1858, nor would any farmer have described a salt marsh as "good land" or been able to grow oats there.

World War I - the first drainage ditch.  A drainage ditch was built on the Tsawout lands to enable the military to train there.   That ditch cut through a protective berm, and a flapper gate was installed to keep the sea out.  In 1927, and in 1935, and again from some time in the 1980's to the present, the flapper gate failed.  This allowed sea water to flow up the ditch instead of draining fresh water out. 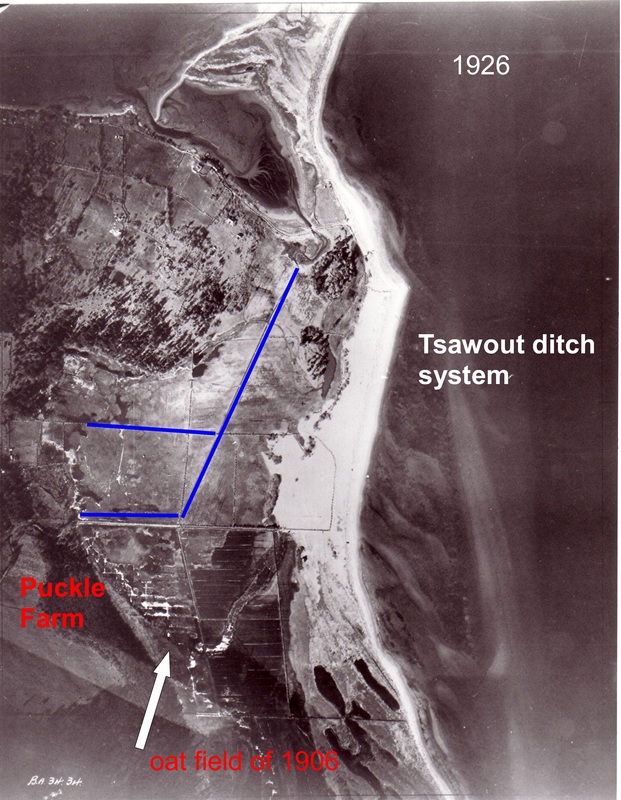 The ditch system built on the Tsawout lands in WWI 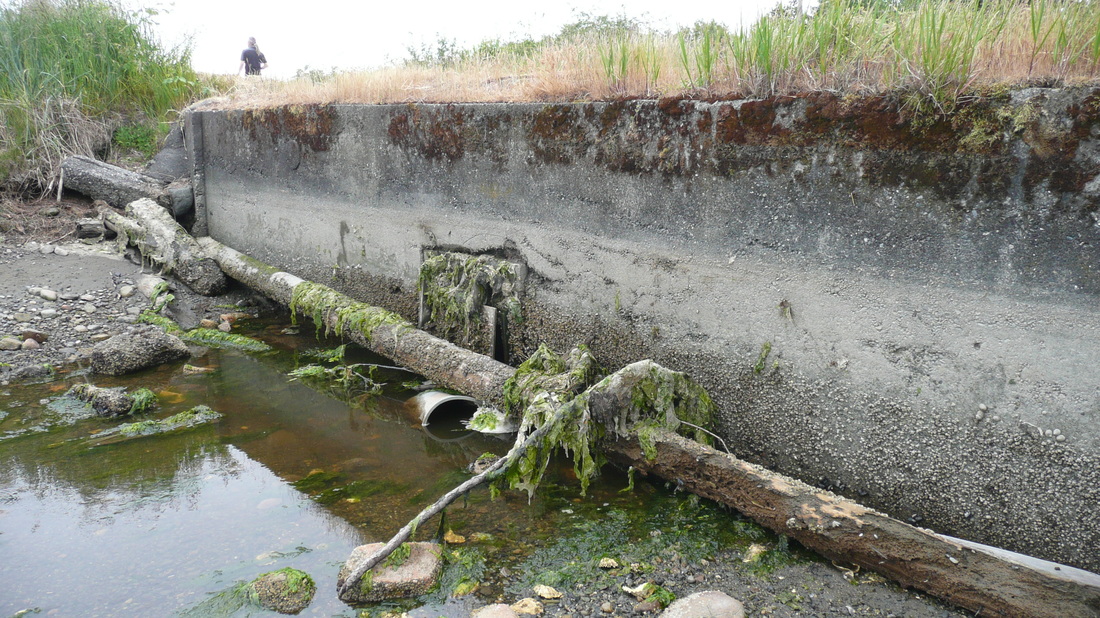 The open flapper gate as found in 2011 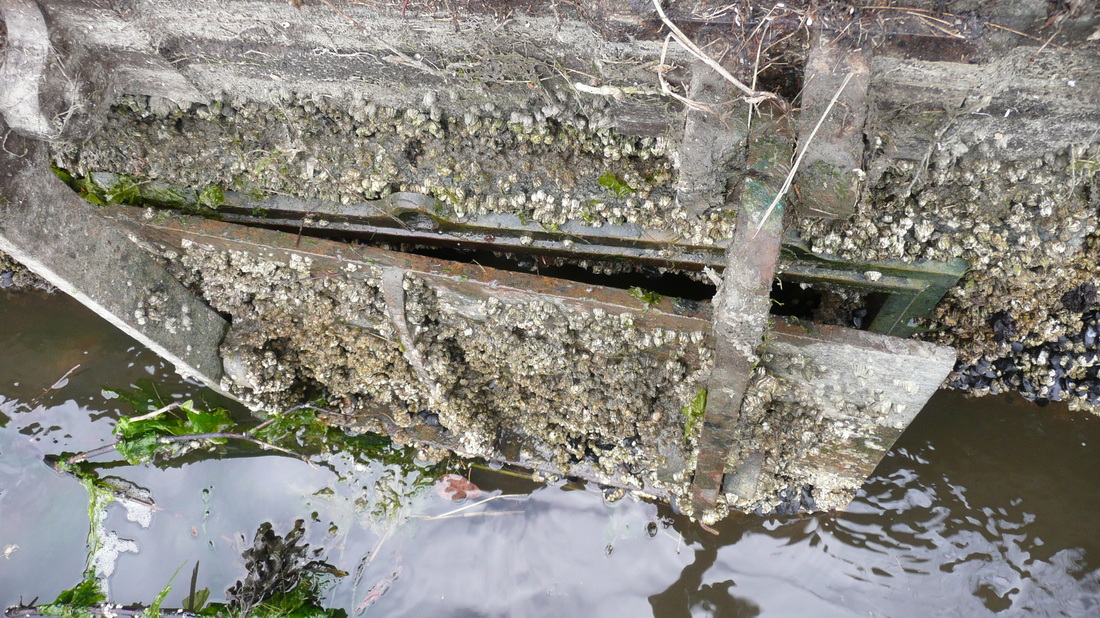 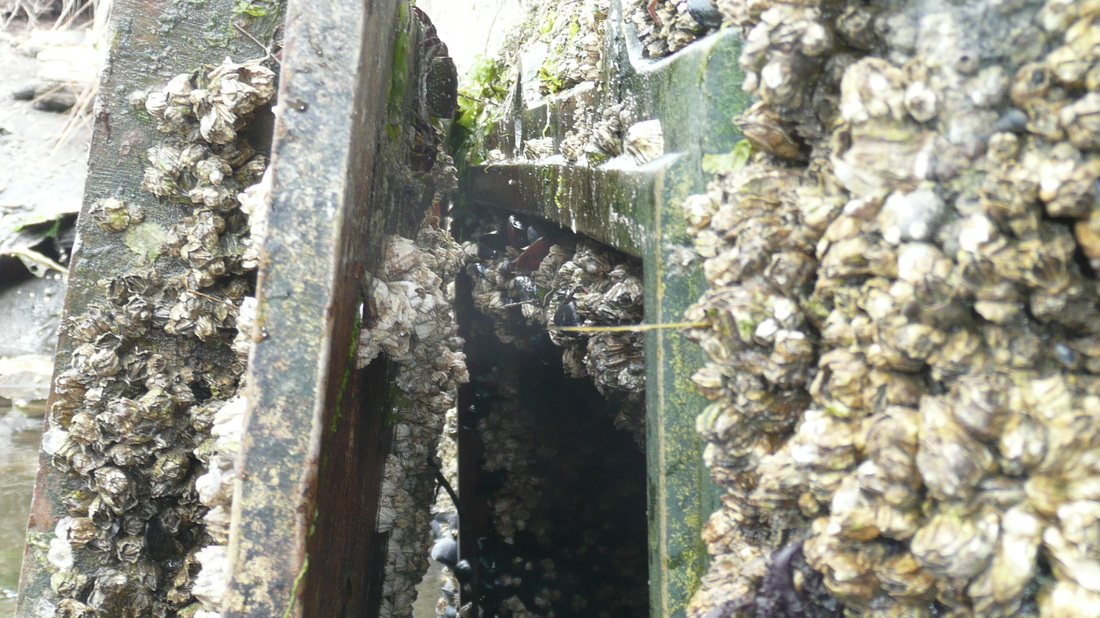 ​
The following videos show the sea water passing through the flapper gate and back up the Tsawout ditch towards Puckle Farm and the CRD park.

What is particularly important, is to observe that the sea water is flowing up within the confines of the clearly man made ditch, and is not flowing over the land.   This was the obvious clue missed by the researchers in 2008 - they saw what they wanted to see, instead of making scientific study. 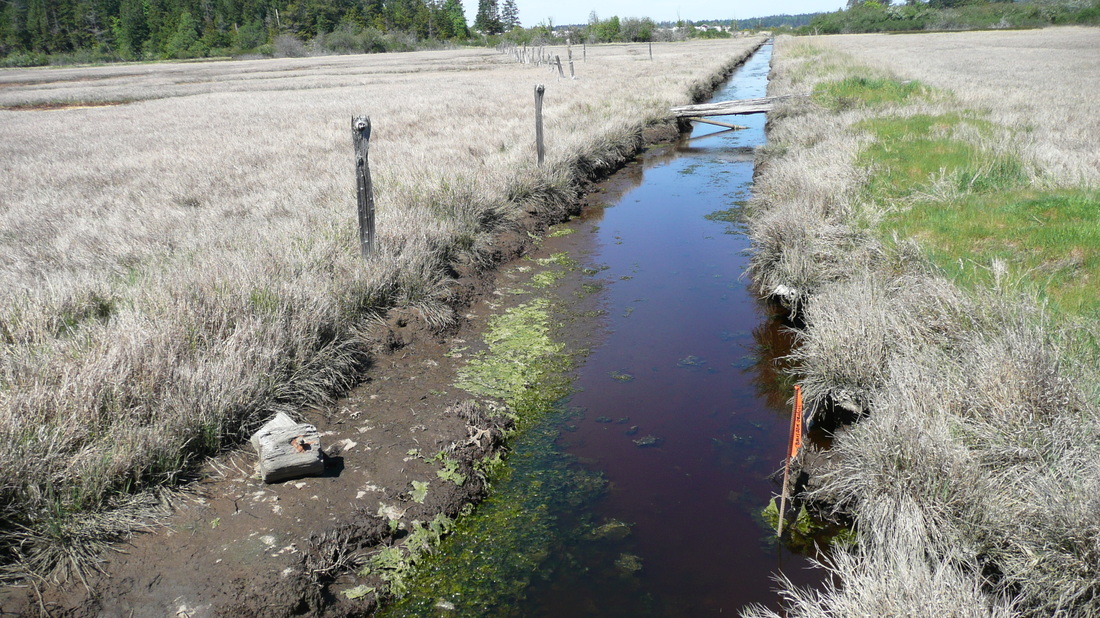 The Tsawout flapper gate was partially fixed in 2012 and from that time the volume of sea water was reduced and no longer floods into Puckle Farm, but is still present in the ditches.
​ 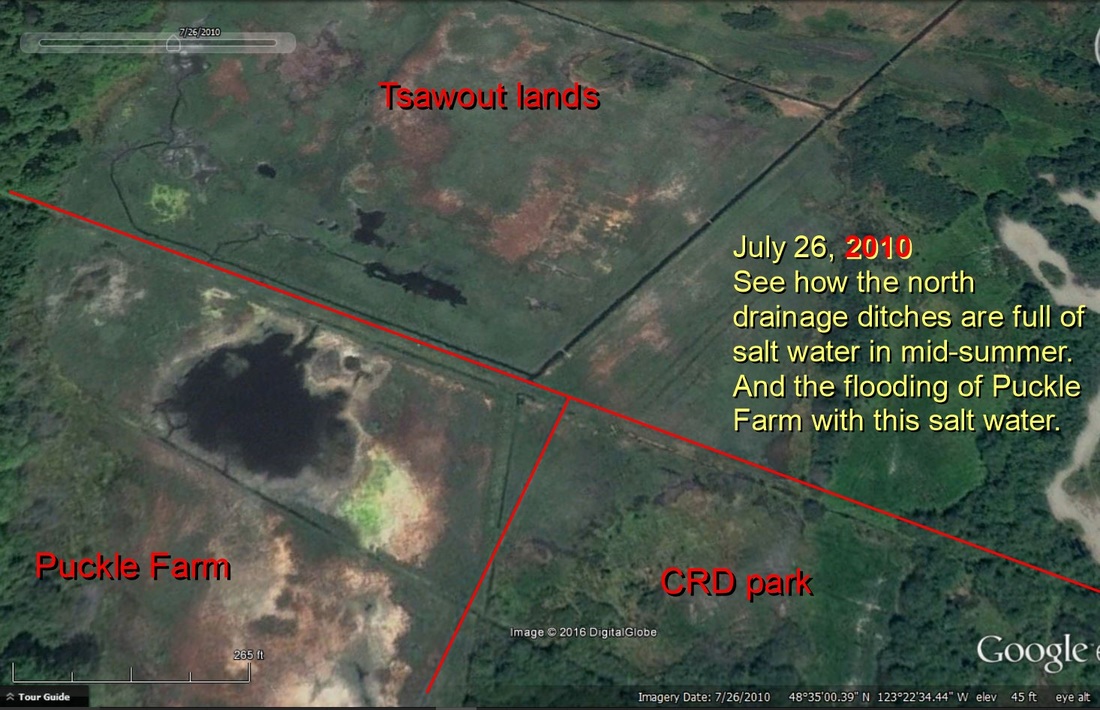 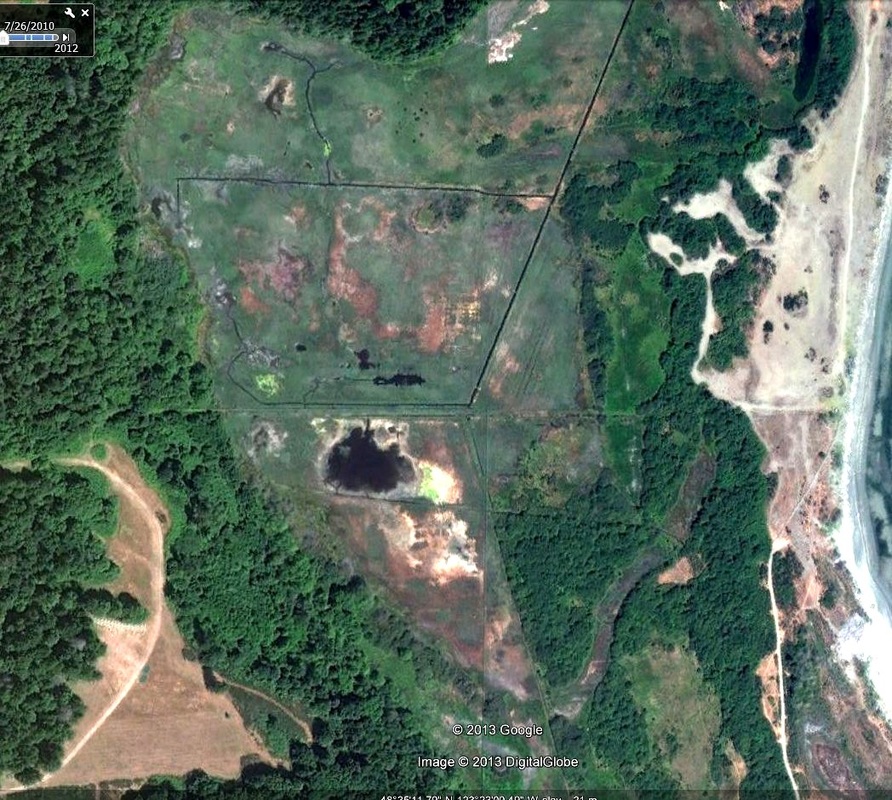 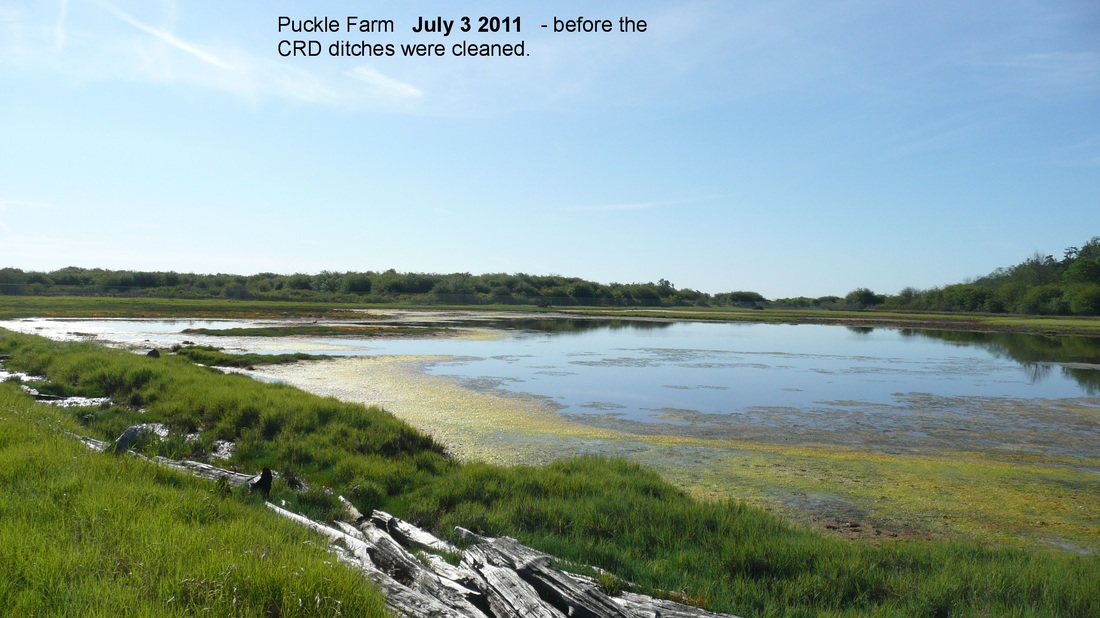 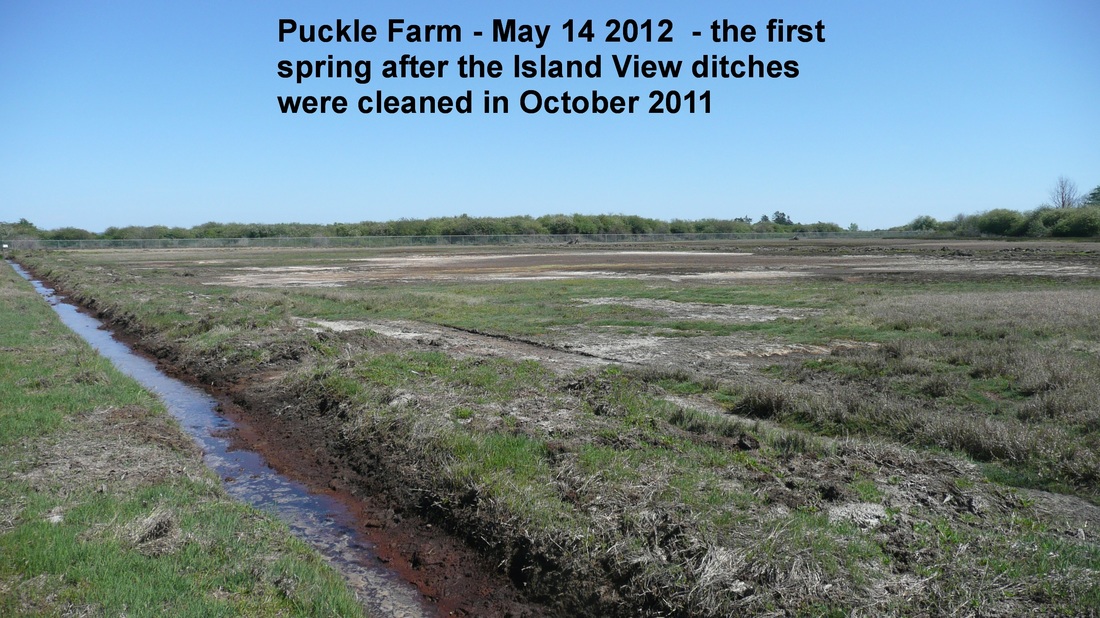 May 2012 - Puckle Farm dry after Central Saanich cleaned the CRD's ditches in October 2011, and the Tsawout flapper gate had been partially fixed, so the volume of sea water was reduced and no longer flowed into Puckle Farm. 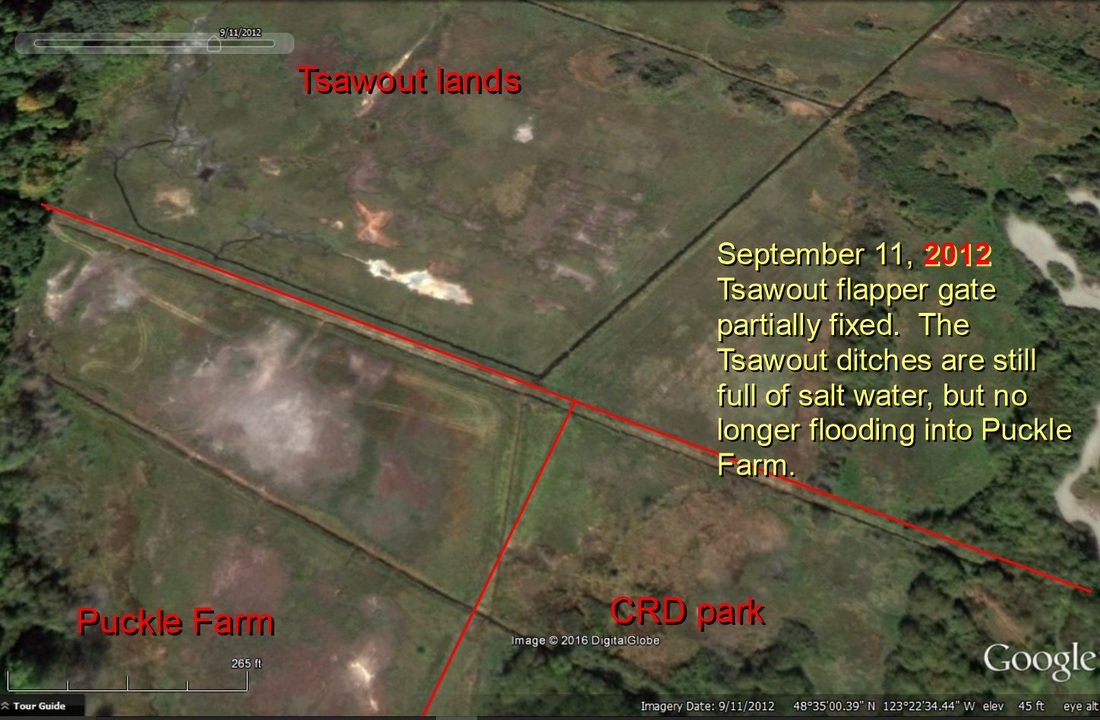 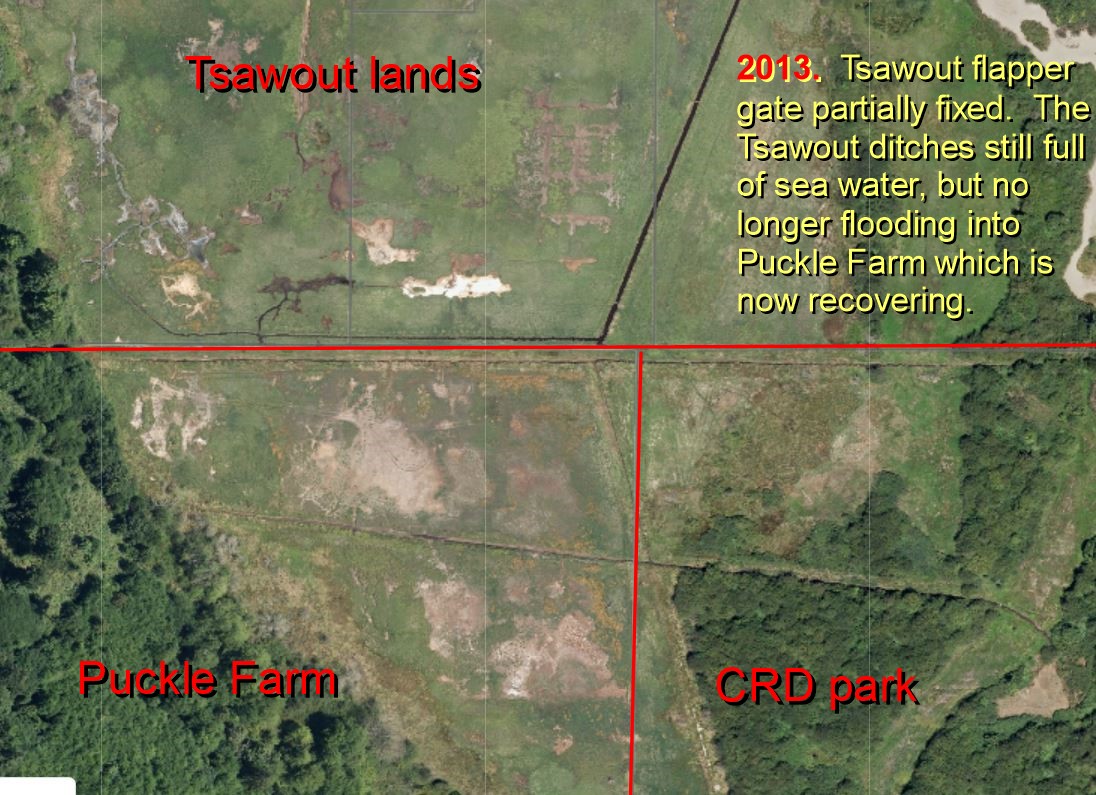 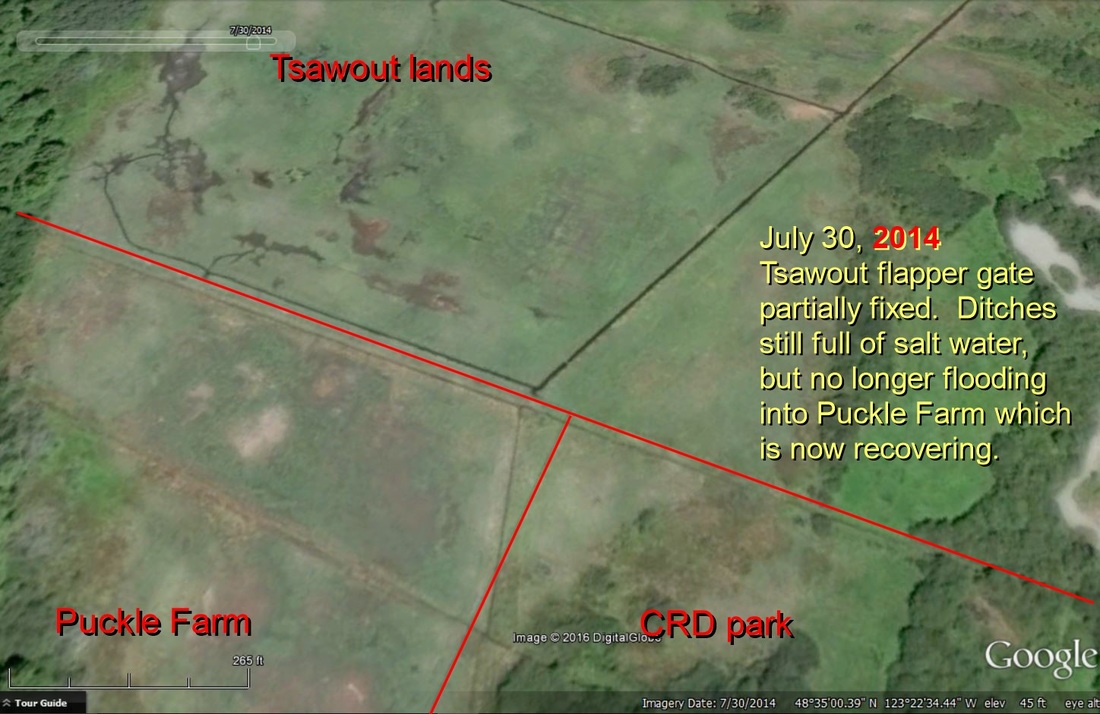 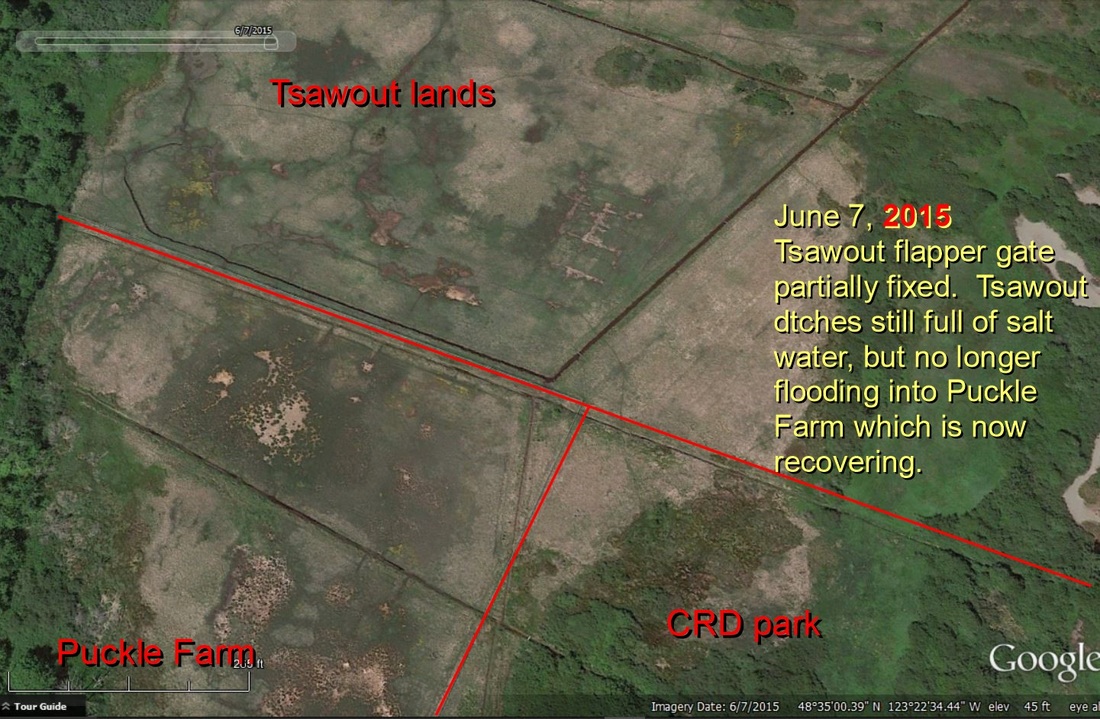