Climate change and sea level rise
CRD staff were cautioned in the Ministry of Enviroment  Stacey Filatow 2009 report, at page 17:

“Sea level rise due to global warming may threaten the ecosystems  …. It is important to integrate climate change into management considerations …” 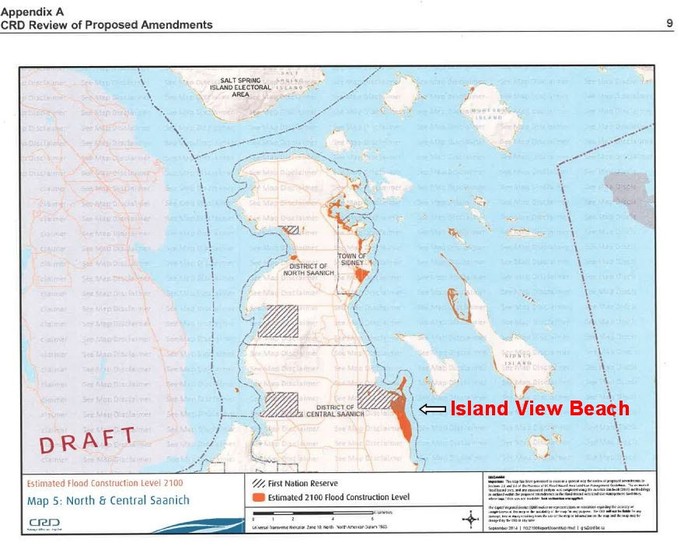 The official policy of the CRD is "The scientific evidence for global warming and climate change is overwhelming" and a letter by the CRD Chief Administrative Officer on November 20, 2014 contained this provincial government map, showing Island View Beach will be one of the first to be inundated if there is sea level rise.


Despite this, the CRD environmental presentation made no allowance for sea level rise.

See here for videos and photos showing how rapidly the park floods if there is a breach in the berm or failure of the flood gate.

In January 2015 the CRD received a report predicting that Island View Beach will be under sea water by 2050, less than 34 years from now.  See here

In June 2016, the CRD released a draft report, quoting predictions that rising sea levels will occur much faster and higher than previously thought:
Only three years ago, generally accepted estimates indicated a maximum sea level rise by 2100 of about 33 centimetres. By 2015, estimates had been revised to indicate a rise of about 100 centimetres. Recent examination of the West Antarctic ice sheet revealed deterioration at a much more rapid pace than expected. This new information caused researchers to suggest sea level rise of 200 centimetres could be expected by the end of the century. A subsequent review of data by another research group led them to conclude that a near 300 centimetre rise could be expected, quite possibly by 2050 – 2060 as described in the following quote:
“In a presentation at the Risk Management Society's RIMS 2016 conference in San Diego April 12, a top scientific official with the National Oceanic and Atmospheric Administration said that recent, as-yet-unpublished data from Antarctica suggests that sea levels could rise three meters — almost ten feet — by the middle of the century.   See here

In these cases Island View Beach may be under sea water in a short period.   The Friends of Island View Beach have been questioning for several years now, why the CRD is wasting hundreds of thousands of tax payer funds, trying to force through unwanted changes on a park that won't exist soon.  This is irresponsible.

https://pacificclimate.org/
University of Victoria
The Pacific Climate Impacts Consortium (PCIC) is a regional climate service centre at the University of Victoria that provides practical information on the physical impacts of climate variability and change in the Pacific and Yukon Region of Canada.
We collaborate with climate researchers and regional stakeholders to produce knowledge and tools in support of long-term planning.
Climate Projections for Metro Vancouver   November 2016