In their environmental presentation at http://issuu.com/capitalregionaldistrict/docs/ivbnep-species?e=2590922/10796110  the CRD said there are 24 (33-9) species "known to use the park "intermittently or utilize areas immediately adjacent to the park and therefore may be affected by our activities in the park." 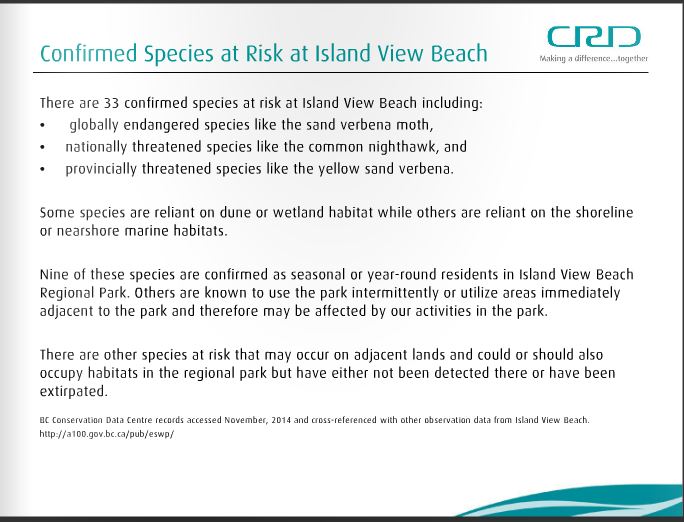 Those 24 are shown on the list following, and are the species not marked with a small tick.
​

We wrote to the CRD on July 10, 2015 requesting confirmation:

"the other 24 species at risk are of concern because they are birds that either use the park habitat during various times of the year or reside in the adjacent terrestrial or marine environments and are potentially influenced by park management actions and park users."

I have looked through the references provided by the CRD and have been unable to find confirmation that these marine birds either use the park or reside in the adjacent terrestrial or marine environments and are potentially influenced by park management actions and park users. Please provide me with the "factual, technical and scientific" evidence to confirm this statement about the marine birds.

Also missing is any "factual, technical and scientific" information that shows when and where these marine birds might be present in the park or "in the adjacent terrestrial or marine environments". Please provide me with this information.

What park management actions or activities of park users do you envisage would influence these marine birds?

The CRD replied on July 15, 2015 "...we are not providing you with any additional information about SAR"   [SAR = species at risk]

No reliance can be placed on this list in the absence of supporting data, and certainly there is not enough evidence to make decisions effecting a new park management plan.