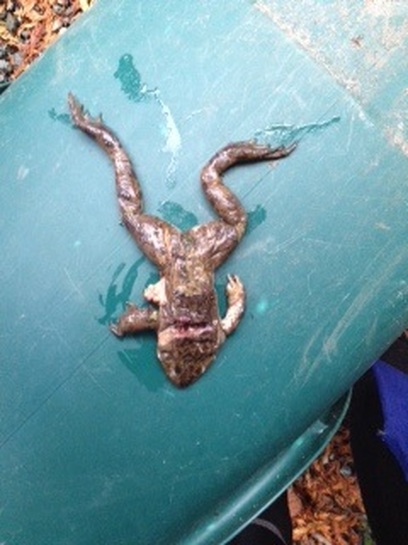 "Bullfrogs are highly predatory, consuming in addition to the conventional frog fare of insects and other small invertebrates, birds, small mammals, snakes, and other frogs (including smaller Bullfrogs). It is disconcerting to see a frog eating a duckling, but the aspect of the Bullfrog diet of most concern to biologists is their habit of eating frogs. Most of B.C.’s native frogs are little more than a bite-sized snack for Bullfrogs, and there is evidence that Bullfrog colonizations of lakes are followed by declines in the native Red-legged Frog and Pacific Chorus Frog populations."
BC Frogwatch http://www.env.gov.bc.ca/wld/frogwatch/publications/factsheets/frogs/bullfrog.htm

"The American bullfrog is a carnivorous amphibian and has a voracious appetite consuming almost anything it can fit in its mouth and swallow. It is an opportunistic predator and has a very varied diet, consisting of insects, earthworms, crayfish, spiders and snails. The American bullfrog catches prey using its large, sticky tongue, after lying in wait for its victim . It also consumes larger prey, including snakes, birds, turtles and frogs, as well as bats and other small mammals and it has even been known to catch swallows flying low over the water. Cannibalism is prevalent in the American bullfrog, with other individuals of the same species thought to constitute up to 80 percent of its diet."   http://www.arkive.org/american-bullfrog/lithobates-catesbeianus/