There are gaps in the records but enough exists to piece together what was done and why.   Until the documents were obtained from the Saanich Archives, it had been believed the 1936 work was only to the new drainage system south of the Tsawout lands.  The new documents show however, that the work was prompted in the first instance with a request that a flood gate be built on the Tsawout ditch system.  This suggests that whatever gate system had been built when those Tsawout ditches were first constructed in WWI had failed, and just as was experienced over the roughly 20 years to 2011, sea water must have been flooding up that Tsawout ditch system and creating what looked like a salt water marsh.


Comparison of aerial photos of the outfall of the Tsawout ditch system from 1926 and 1946 show the likely positions of the original WWI Tsawout flood gate and the new one installed in 1936.   The 1926 photo shows the ditch went to a small estuary, and from the water flowed in serpentine fashion to the sea.   The 1946 photo shows that part of the estuary was bypassed and the new flood gate built in its present position and a road built over it.     The materials list on the Engineer's report shows "440 feet  32" re-inforced Concrete Conduit and 2 - 32" Bronze Flood Gates complete and installed  ..".     One of those flood gates would have been for the Tsawout ditch and the other for the new ditch system south of the Tsawout lands.   The outfall pipe on that new ditch system measures 400 feet (see the photo on the top of this page)  leaving 40 feet for the Tsawout system which makes sense.
The extent of the "deadly" mosquitoes in 1936

Many of the documents below describe the mosquito problem in 1936, and none more eloquently than the letter from W.D. Michell, who said of the mosquitoes:

"which were spreading to all parts of Saanich. In some sections it was almost impossible to get help to harvest crops, such as strawberries and loganberries, where a large amount of help is required, and even in harvesting grain crops. You could not venture into your field without being pestered to death, and livestock was being tortured unmercifully.    ..............  In a single year the control work has exterminated 90 per cent of the dreaded mosquitoes, and where land has been cultivated the extermination has been up to 100 per cent."

The June 2, 1936 letter from the District of Saanich to one of the property owners speaks of "the enormous number of mosquitoes..."  And the memorandum of agreement between the property owners dated June 1936 says on the second page the purpose of the drainage work "is being under taken in an endeavour to control and mitigate the breeding of mosquitoes .... which is apparently caused by stagnant water lying on said lands.."    In the year following the work, the Saanich Fruit Growers Association wrote on June 19 1937 thanking Saanich Council for "counteracting the deadly mosquito menace.   To date the mosquitoe is negligible in the Keating, Saanichton and Ward 5 districts."  This gives some idea how widespread the mosquito problem had been.  Ward 5 then is now the northern part of Saanich where it meets Central Saanich, and Keating and Saanichton were over by Veyaness Road.   And all those mosquitoes coming from island View Beach!

The work
The correspondence shows the work consisted of

Timing of the work
The work began in June 1936 and was completed by September.


The results of the 1936 drainage system and replacement flood gate of the Tsawout ditch - no mosquitoes!
Just as was found in the years following 2011 when Central Saanich cleaned the ditches, the new ditch system south of the Tsawout lands and the replacement of the Tsawout floodgate in 1936 cured the mosquito problem.  Writer after writer said this, including the Federal Government entomologist.   It confirms the only effective way to control mosquitoes on a large scale is to remove the breeding grounds of standing water with a properly maintained drainage system.


The documents - with appreciation again to Saanich Archives and Vern Michell 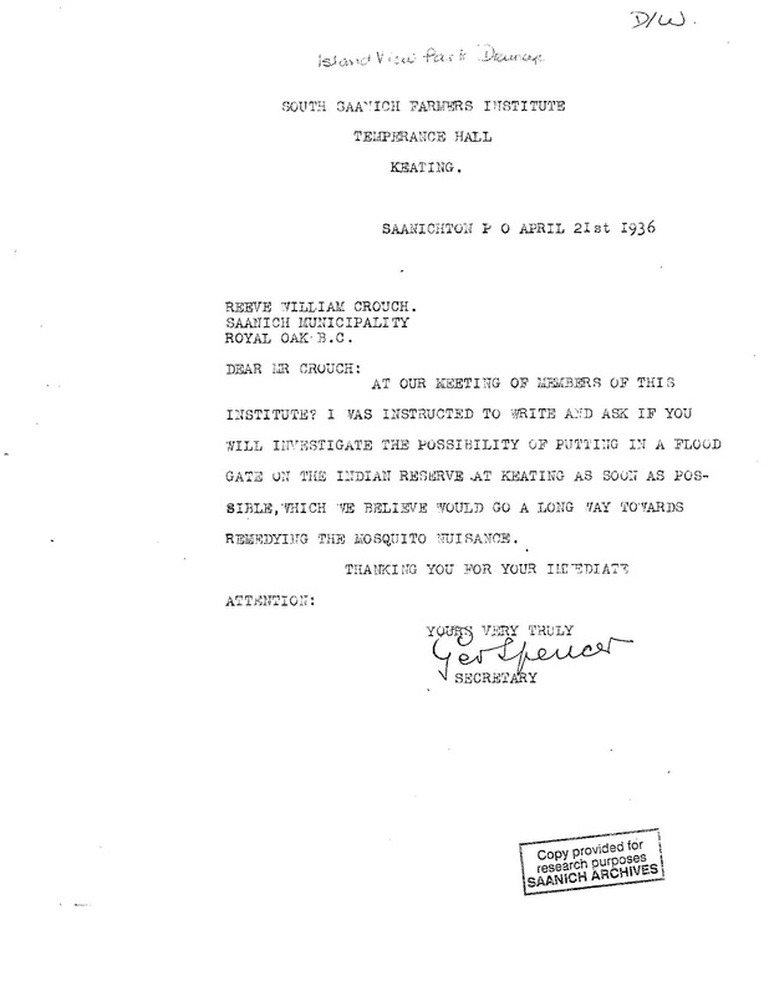 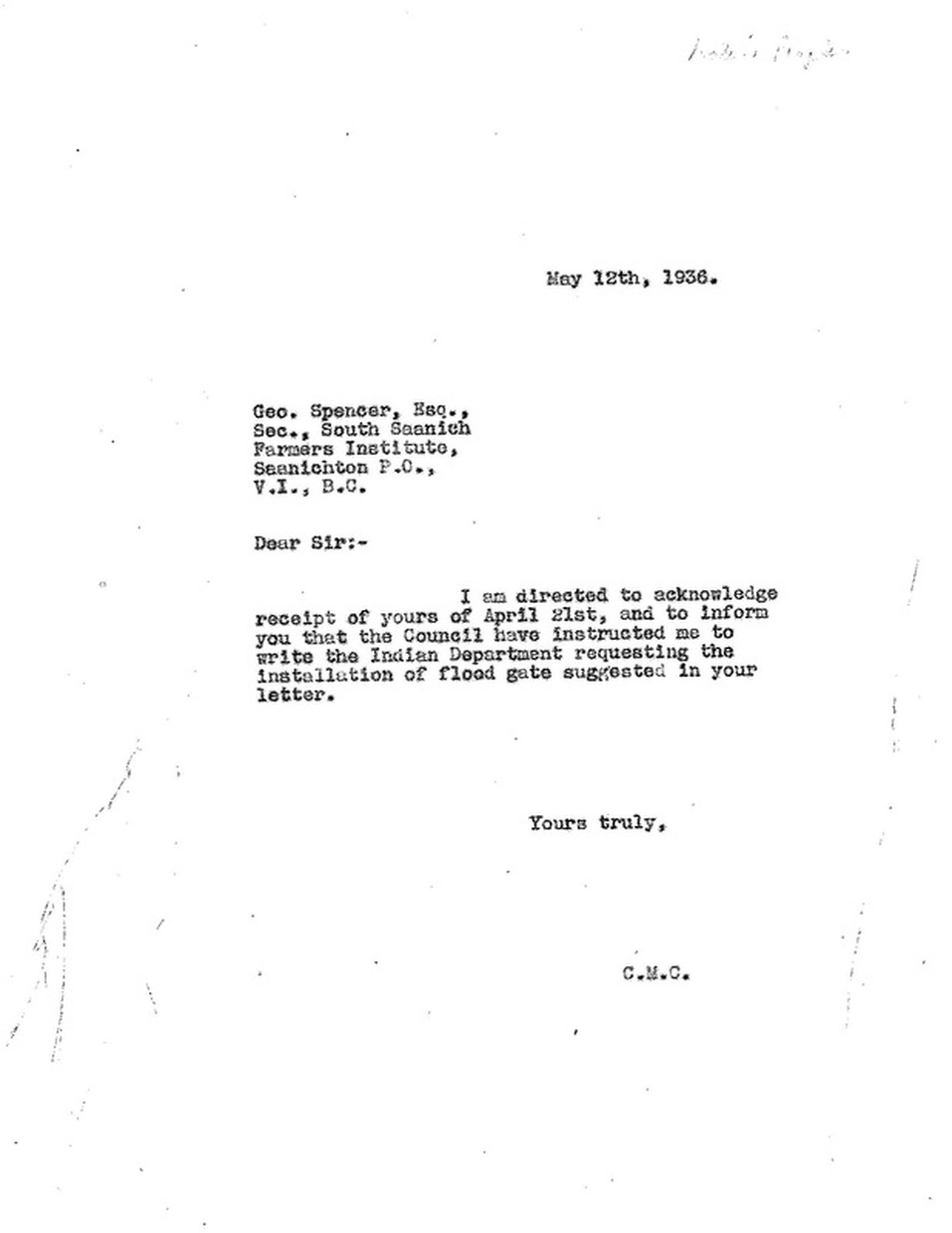 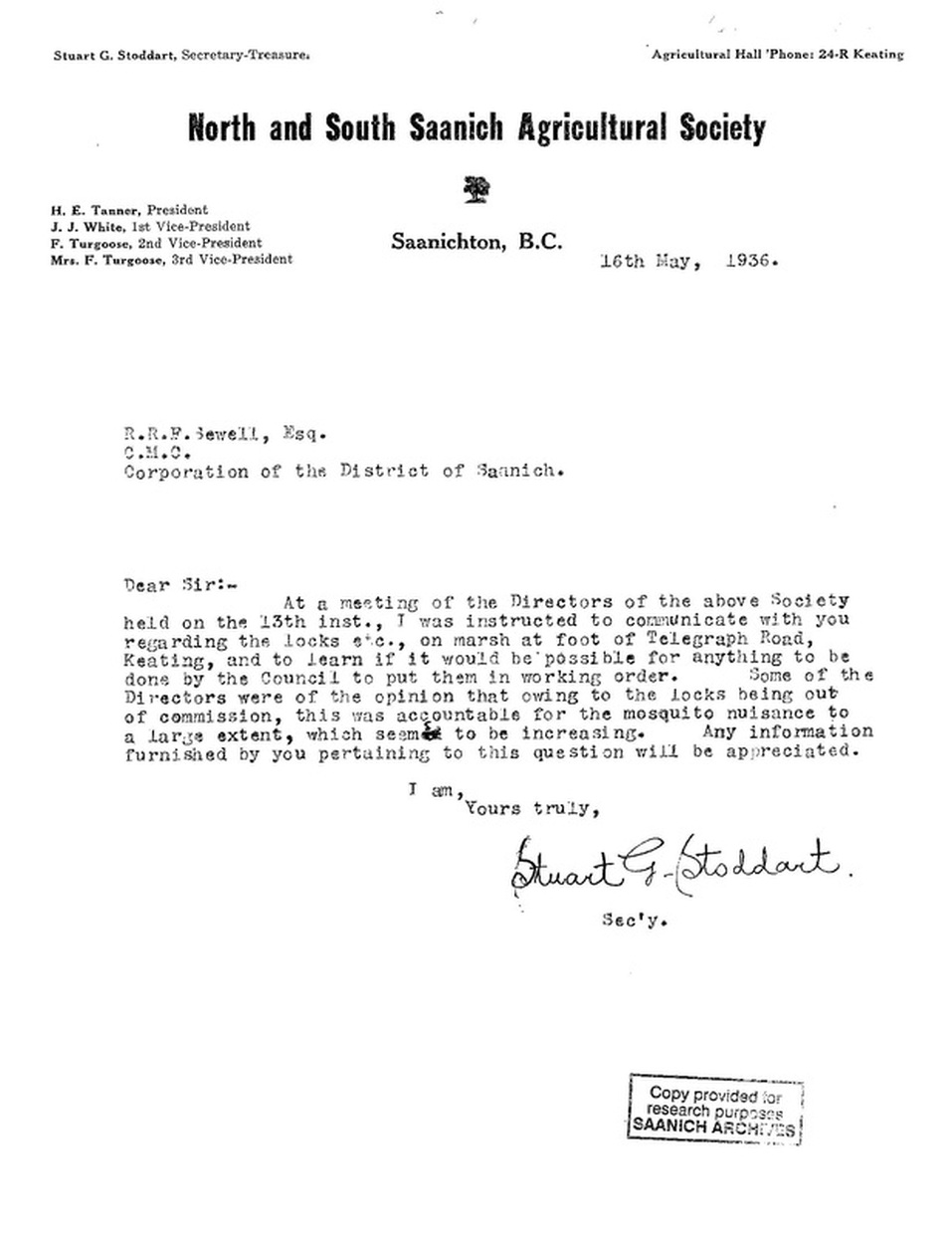 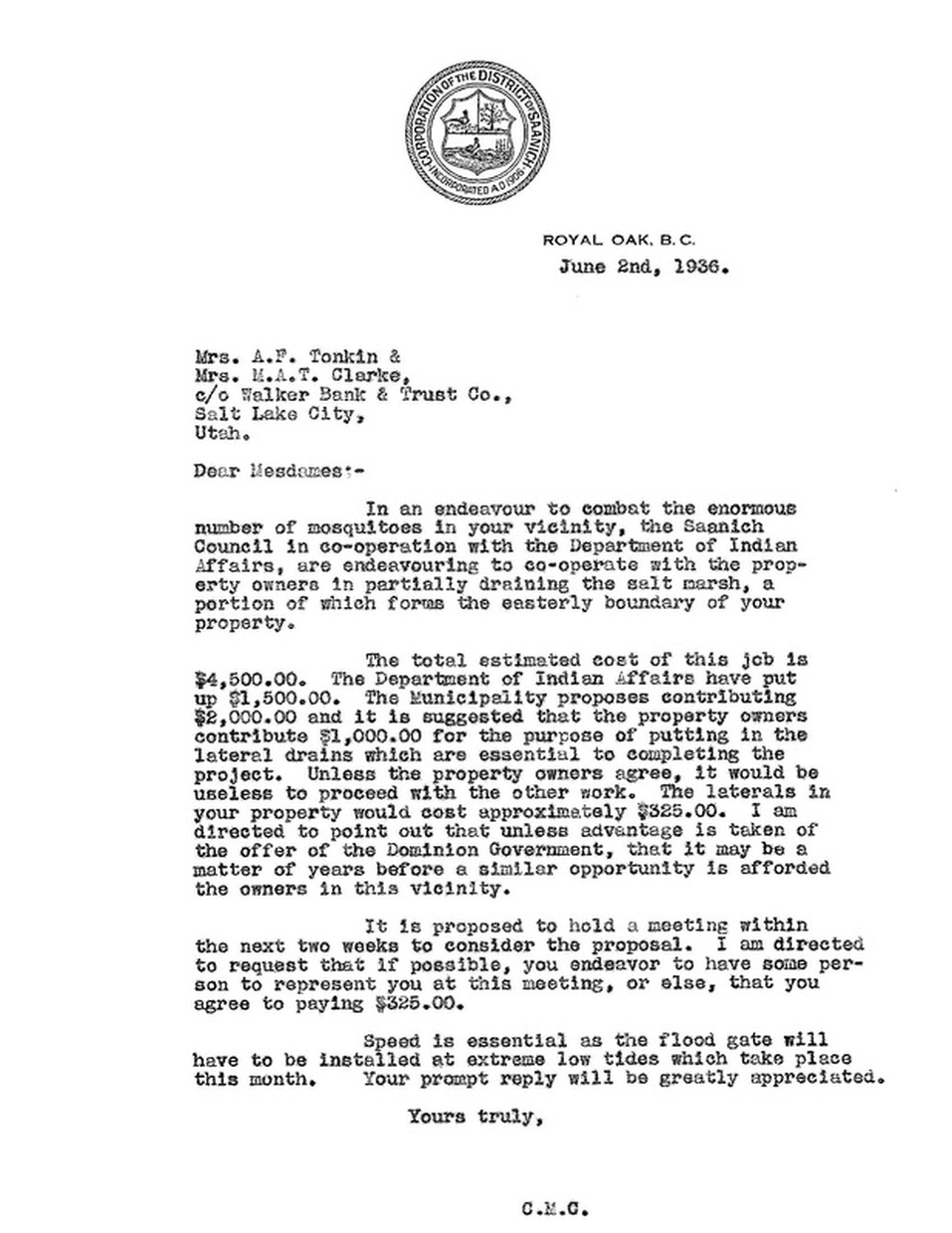 Note: Mrs. Augusta Tonkin and her daughter Mrs. Marjorie Clarke were the registered owners of Puckle Farm, whose 140 acres ran along the south boundary of the Tsawout lands. 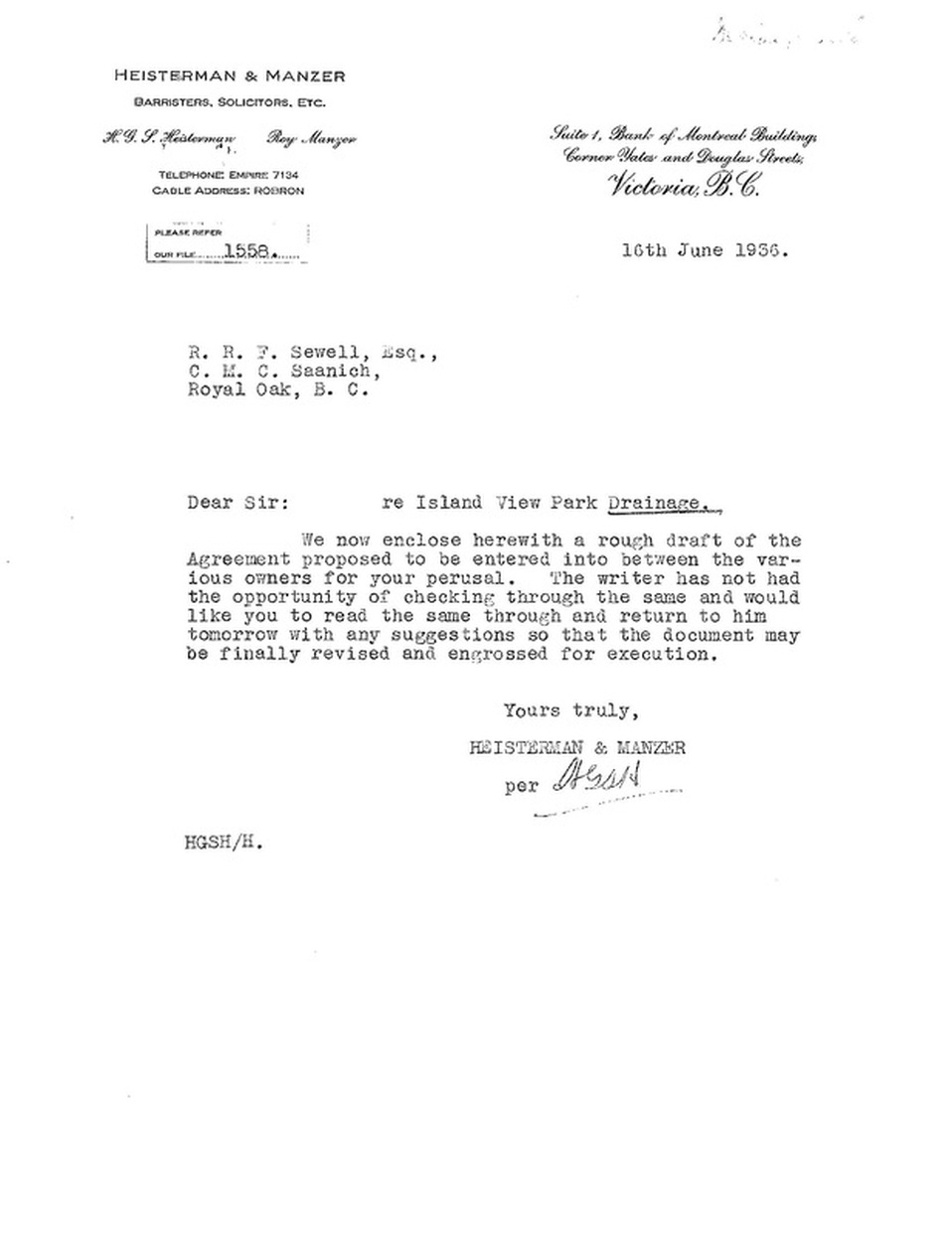 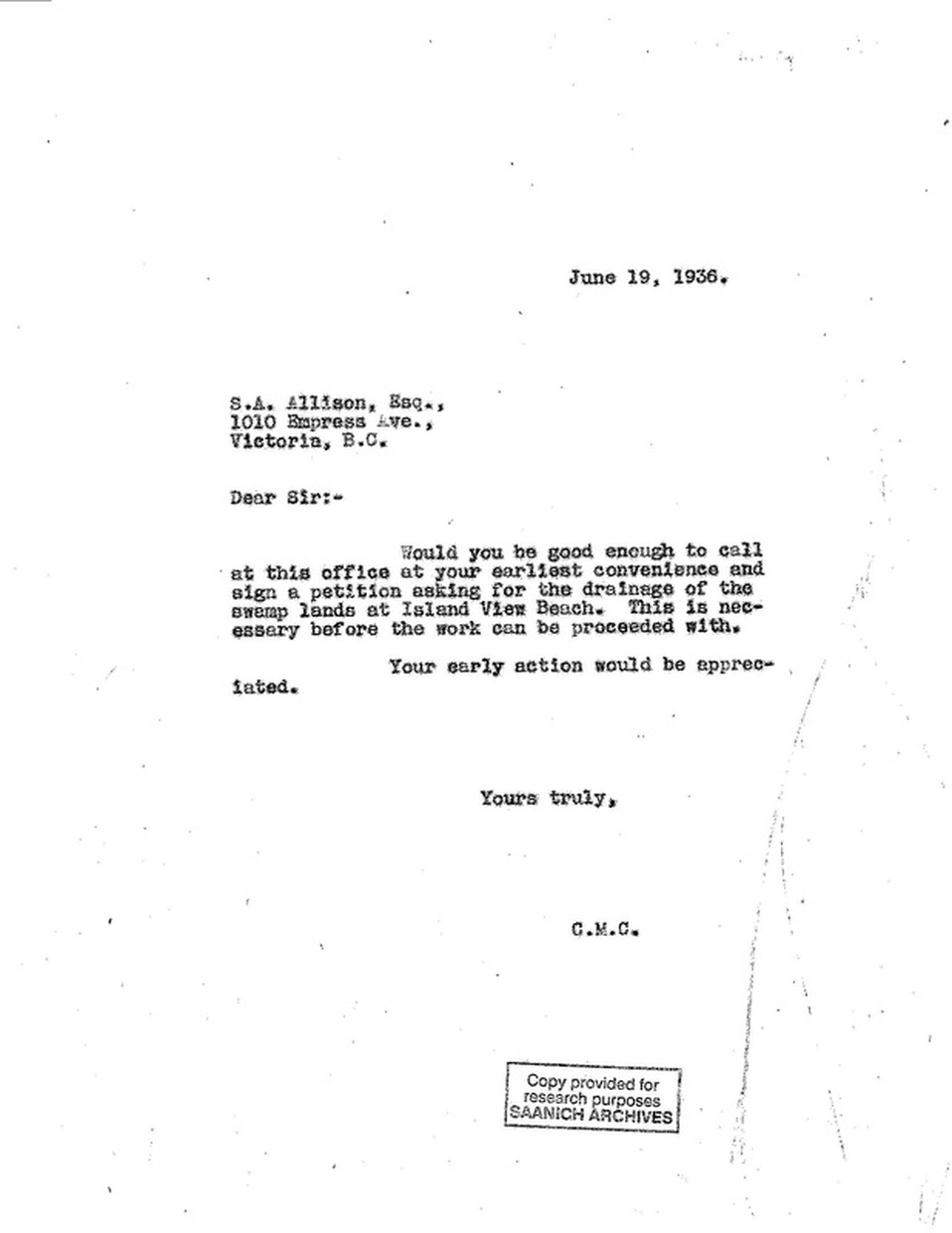 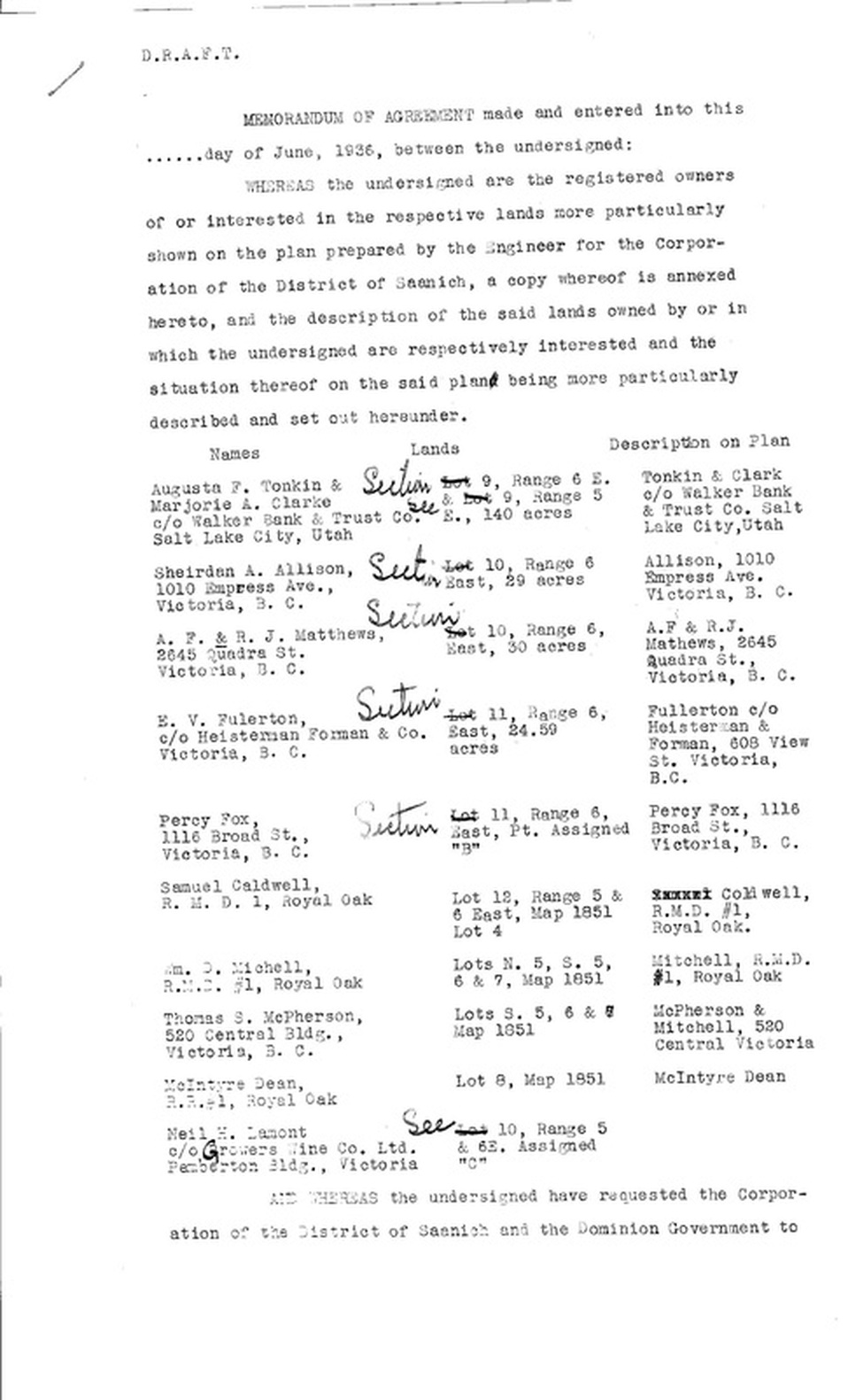 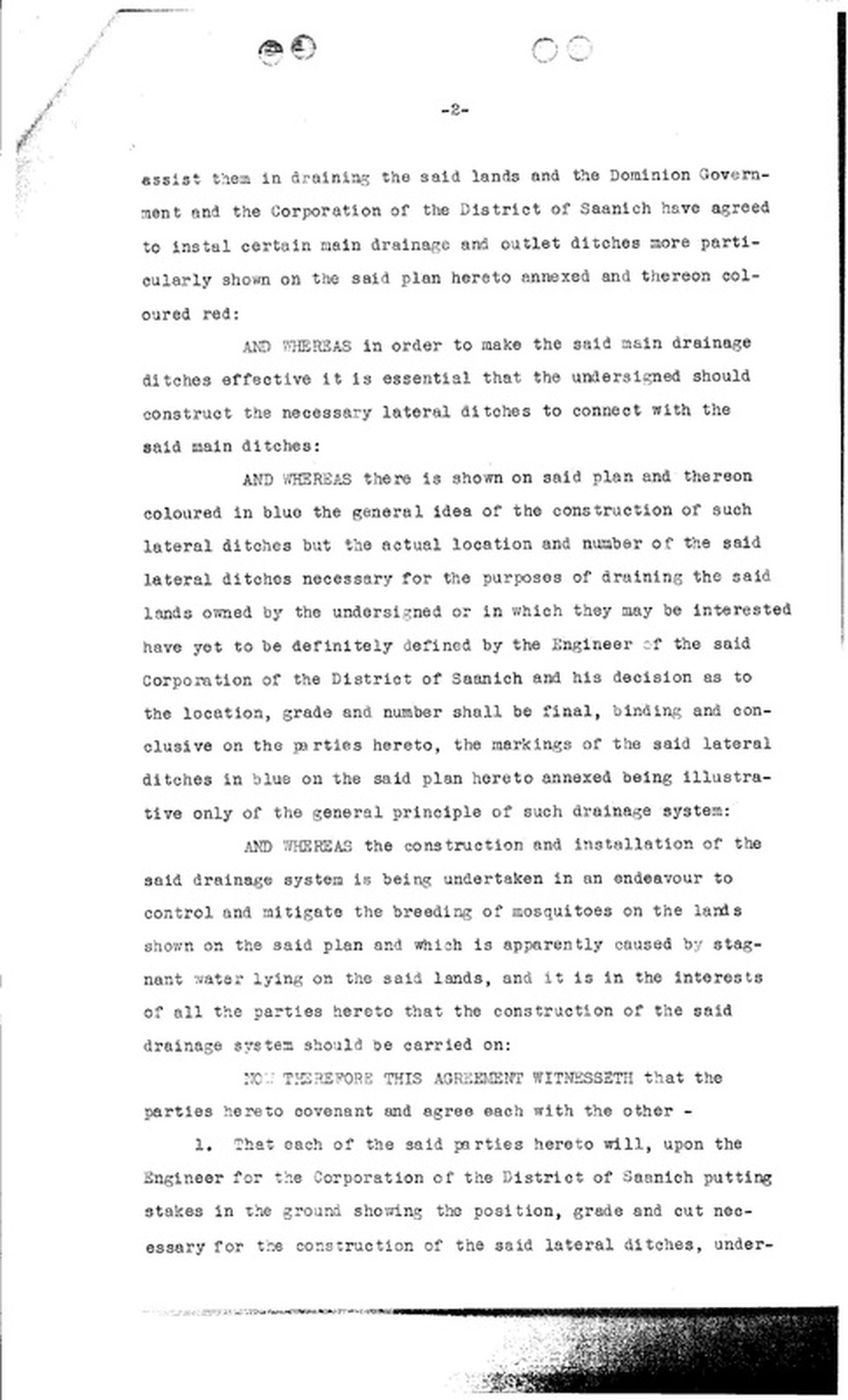 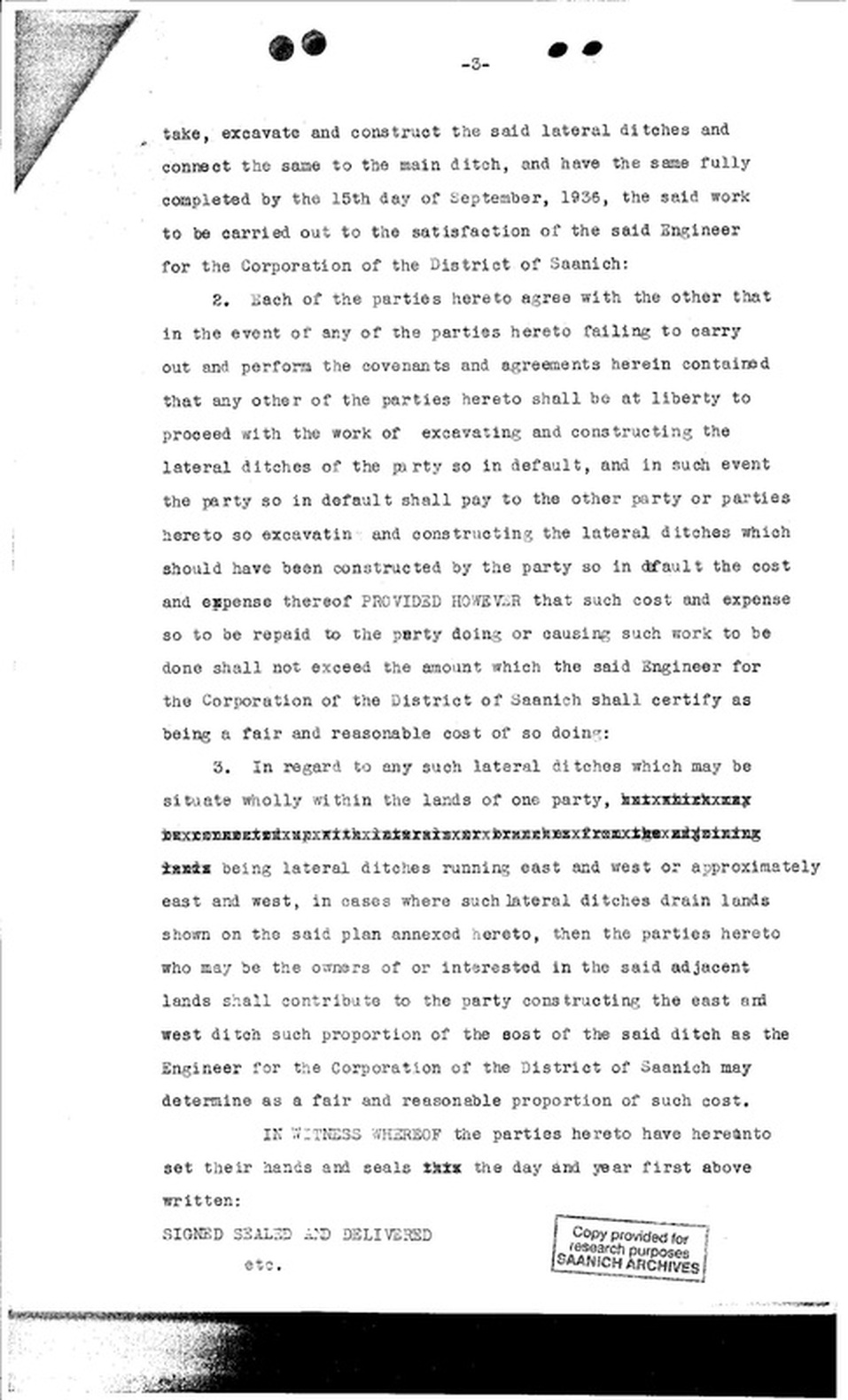 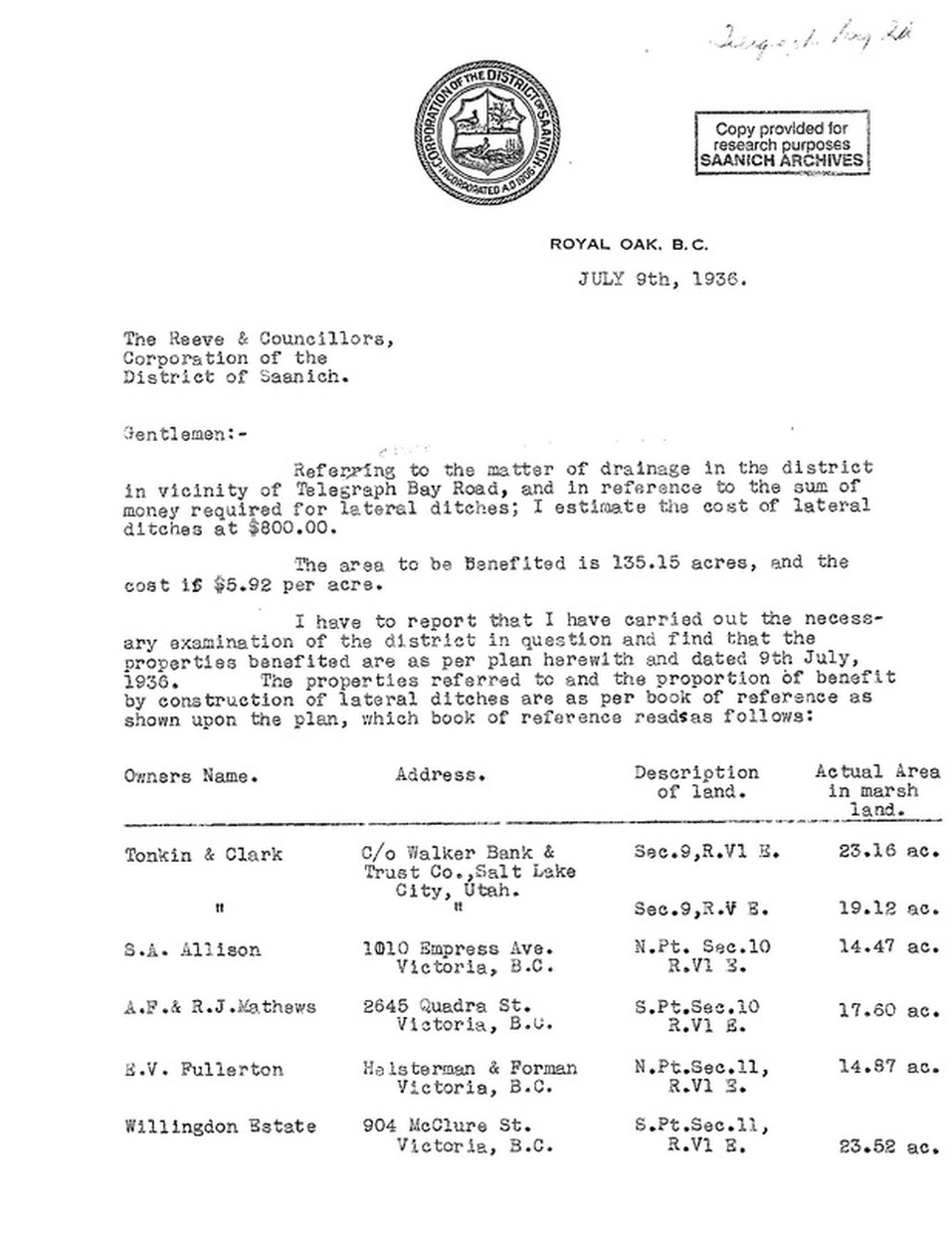 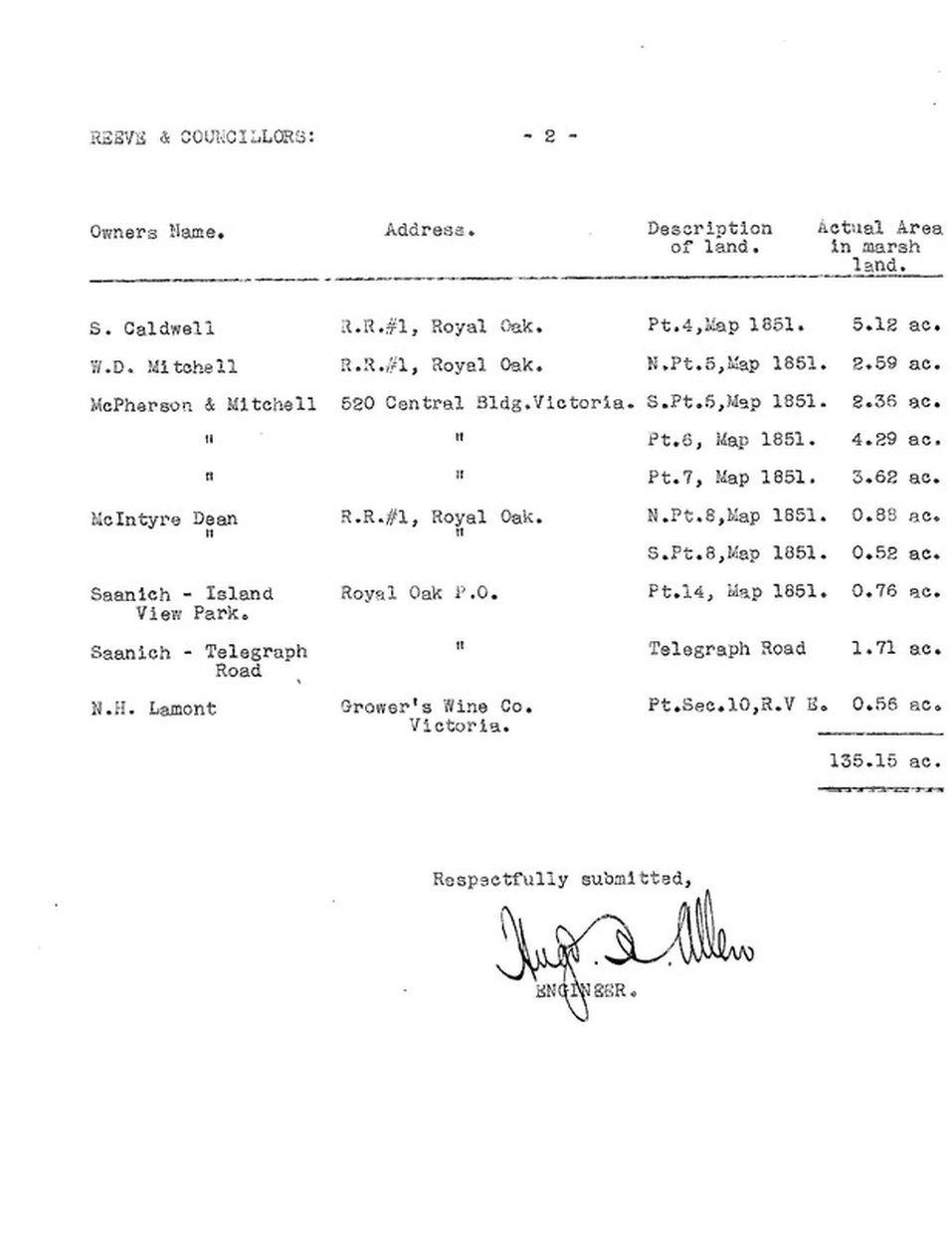 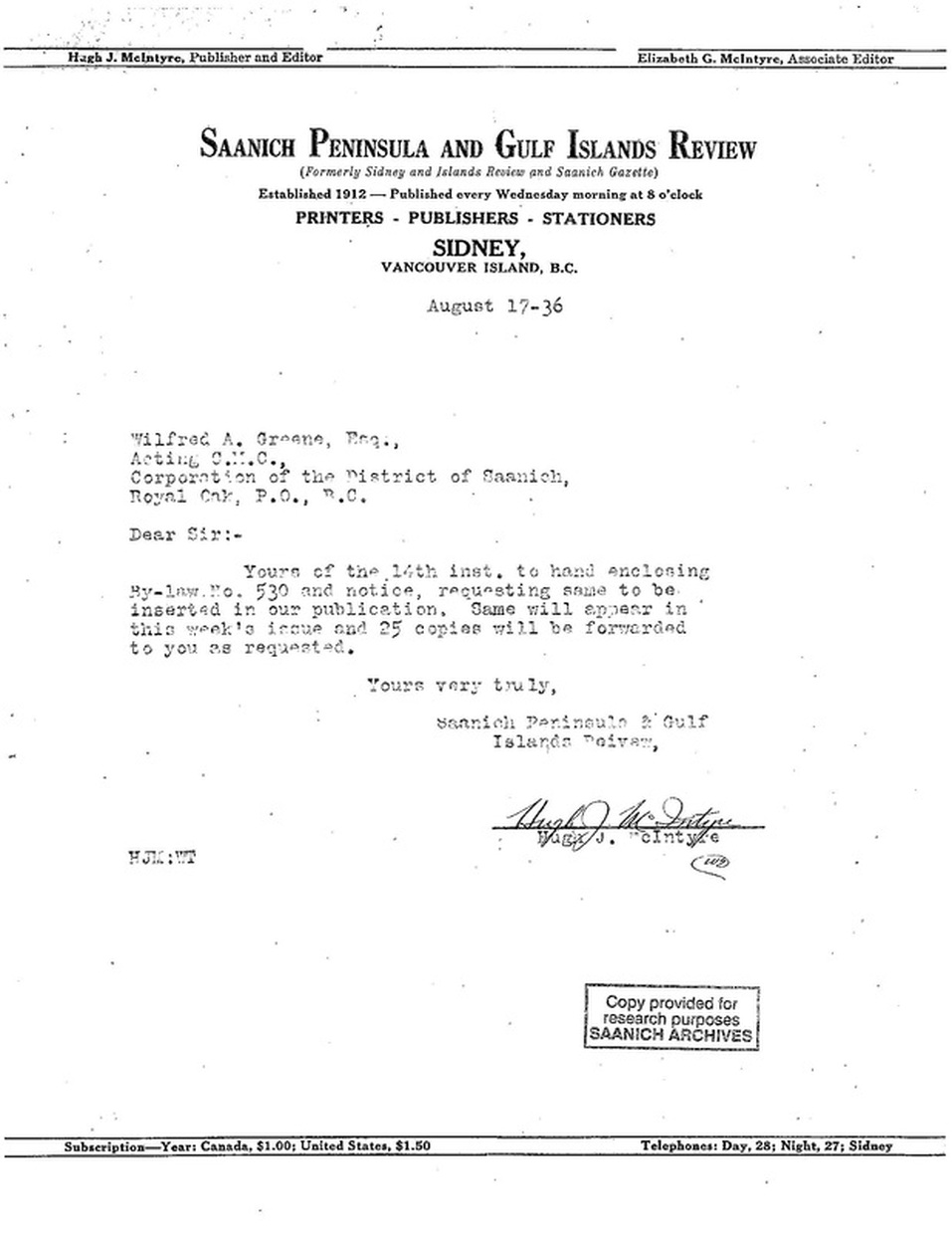 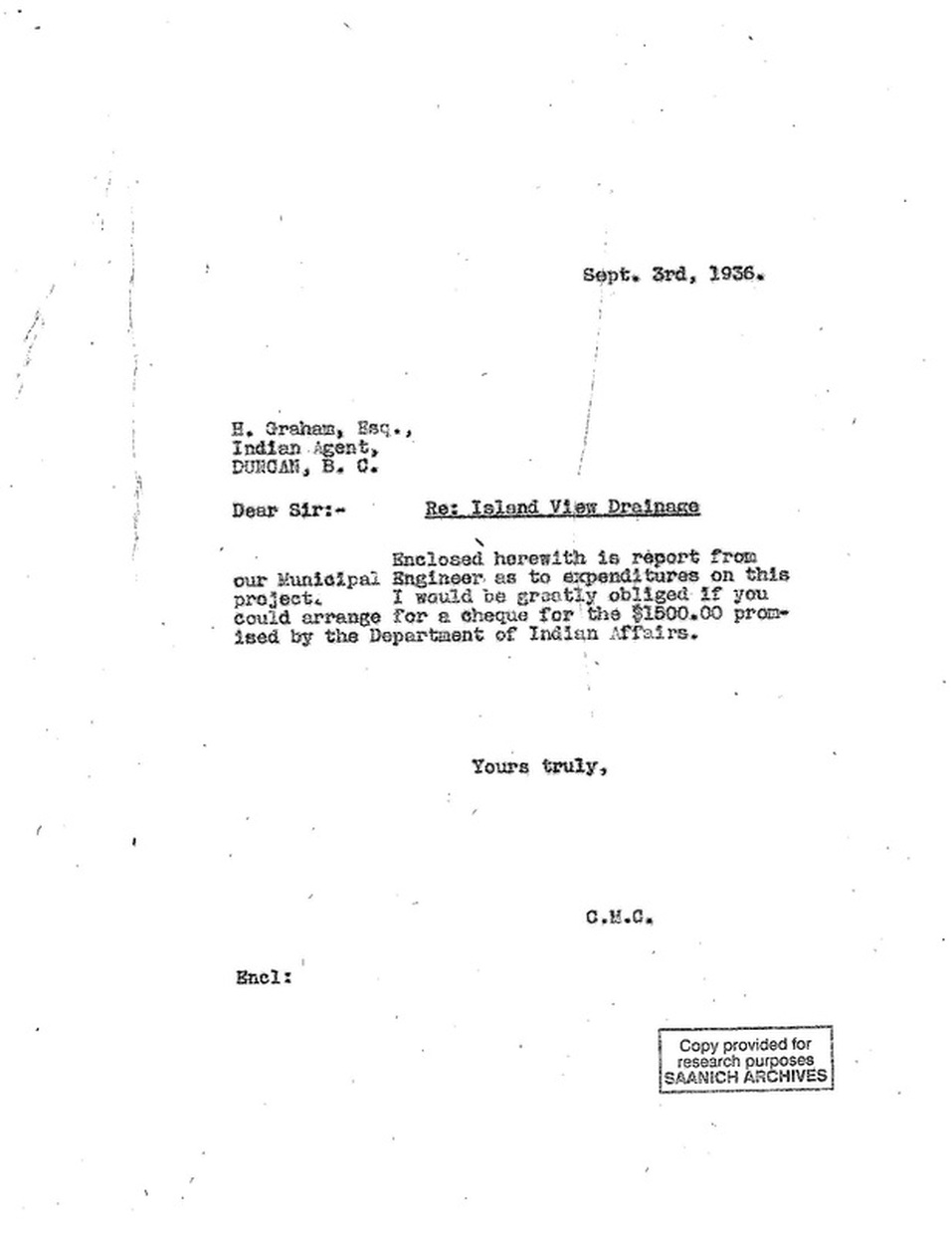 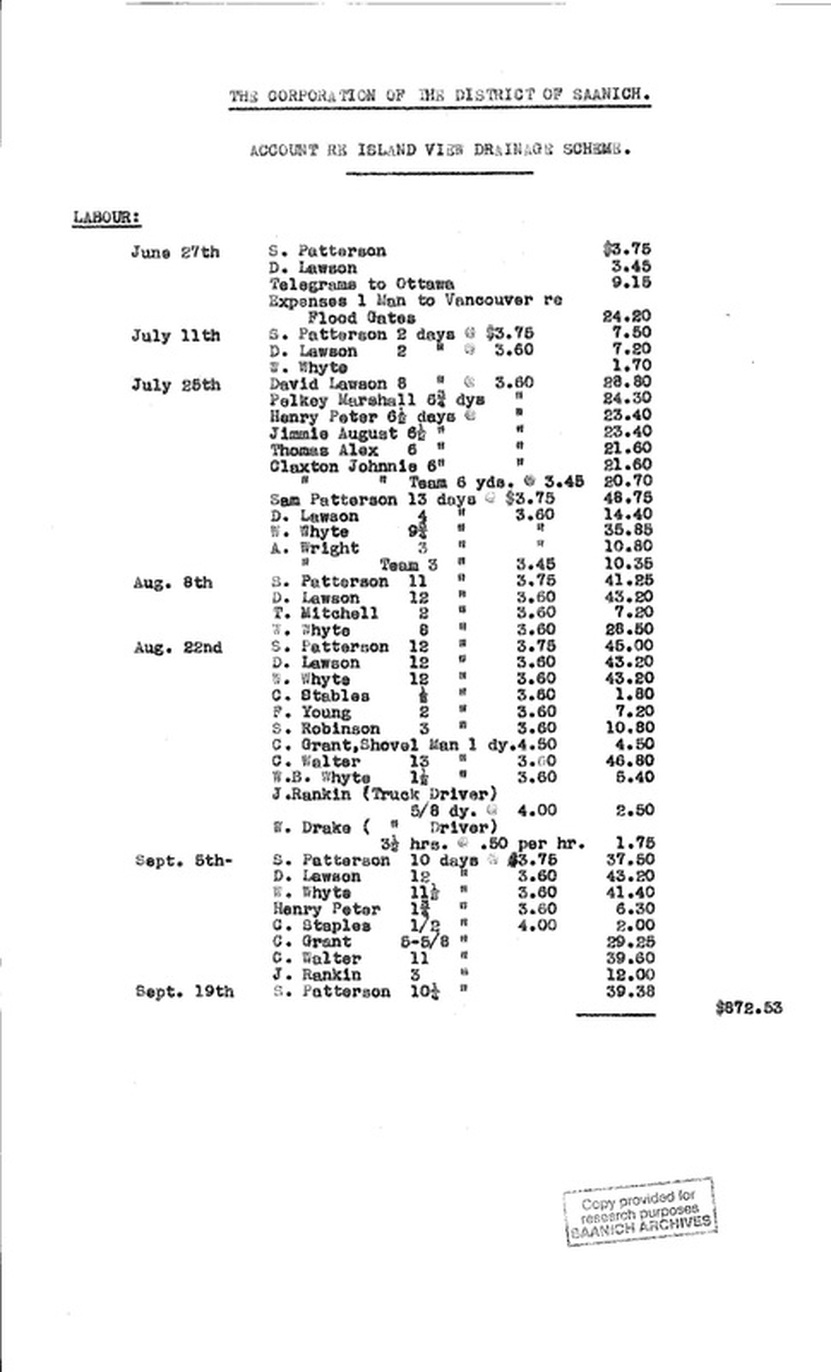 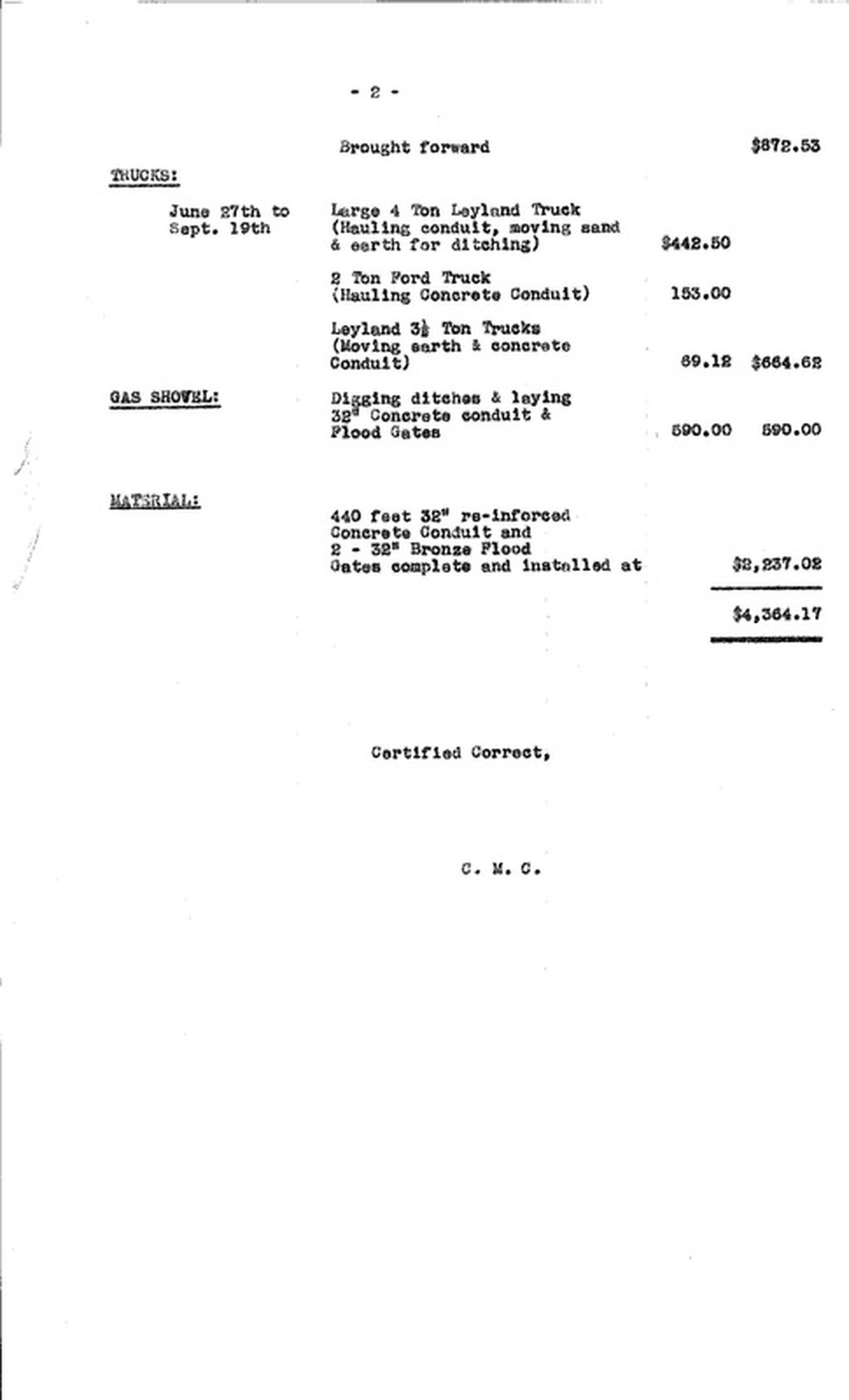 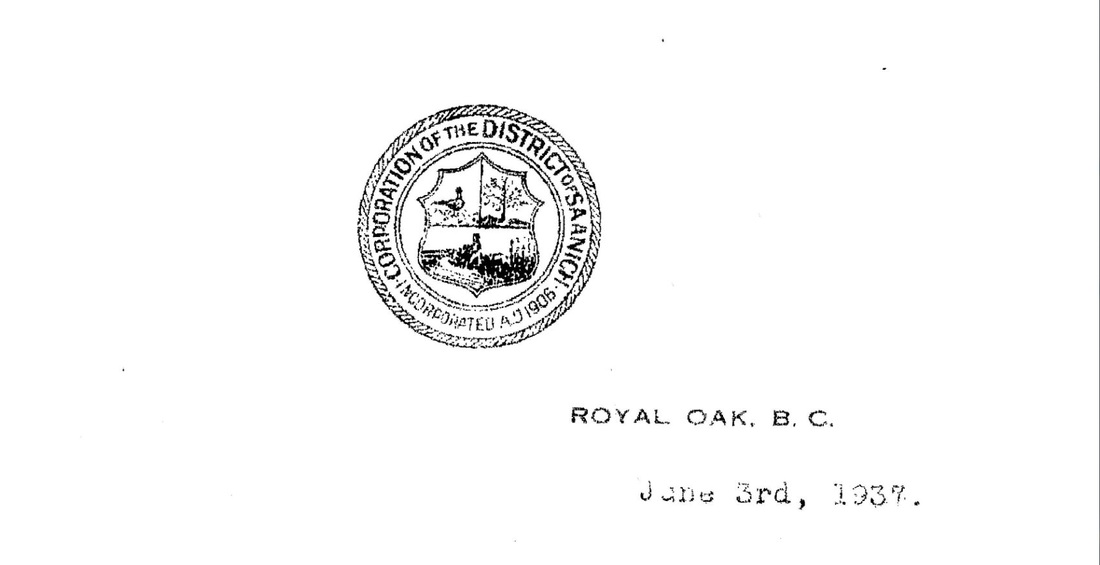 This was a letter from the District of Saanich to a Mr. Arthur Neaves on June 3, 1937. It has been enhanced and enlarged to make it readable but the quality is still poor. It says: "Referring to your letter of enquiry in connection with drainage in the vicinity of Island View Beach. The amount of money received from the Dominion Government was $1,500.00. As to the amount of money spent on the Indian Reserve, there was no allocation to the expending in the different parts of the beach work ...." "The amount paid Indians for labour was approximately $424.50. To the best of my knowledge the work has been inspected by officials of the Indian Department. The total expenditure on the beach was $5,853.89, of this amount the sum of $800 was raised and taxed against the property for a period of 3 years. The cost of the gates was $317.52" 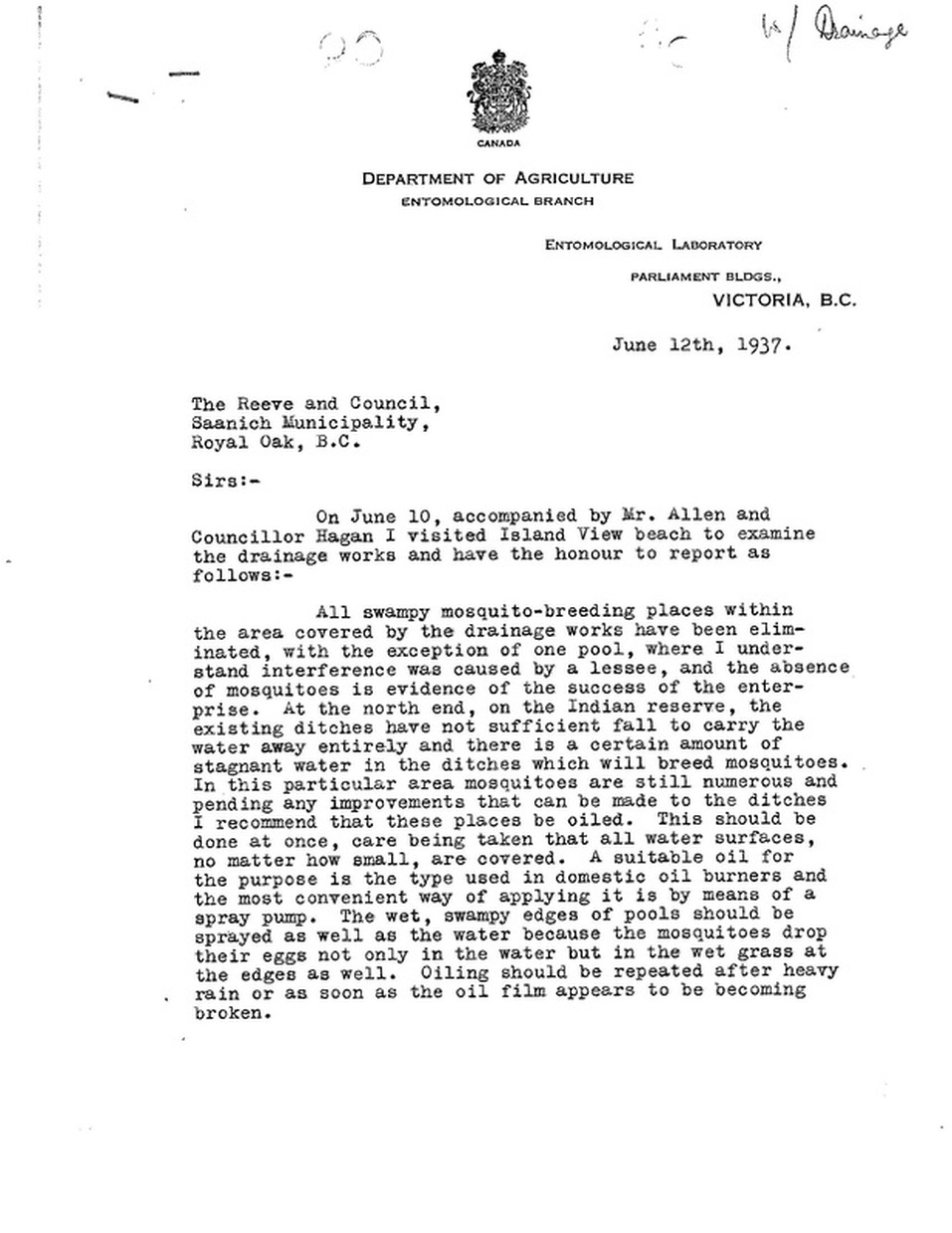 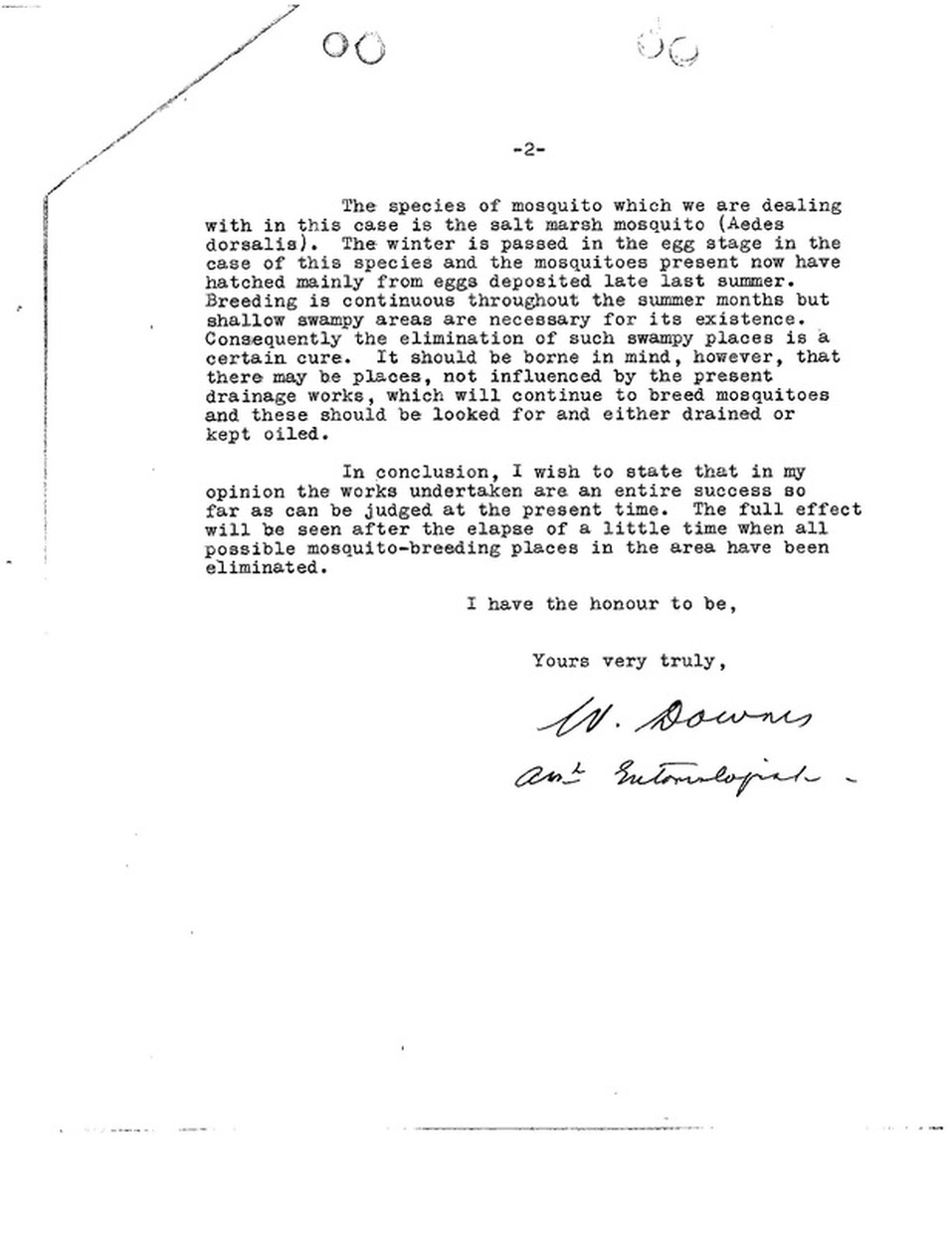 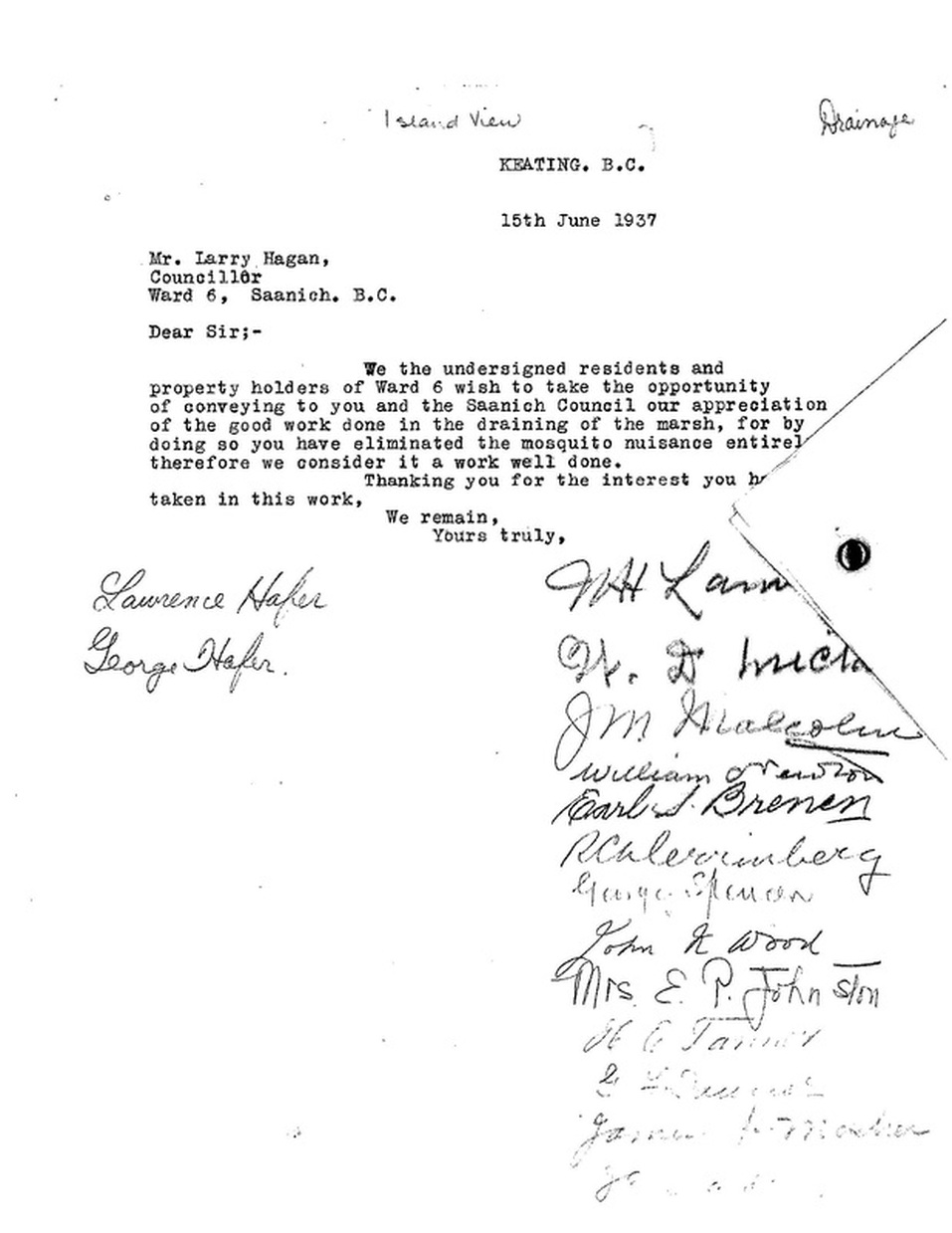 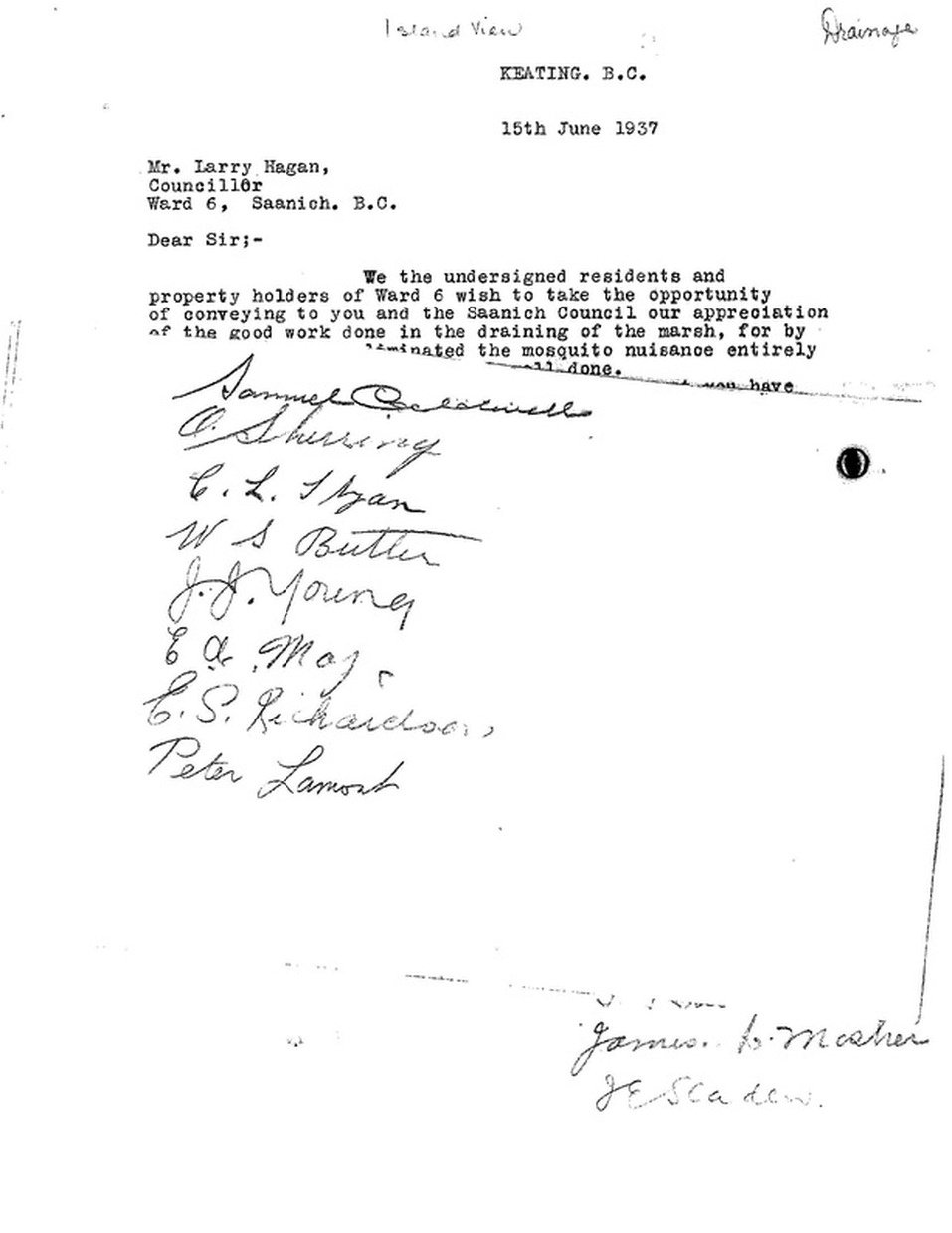 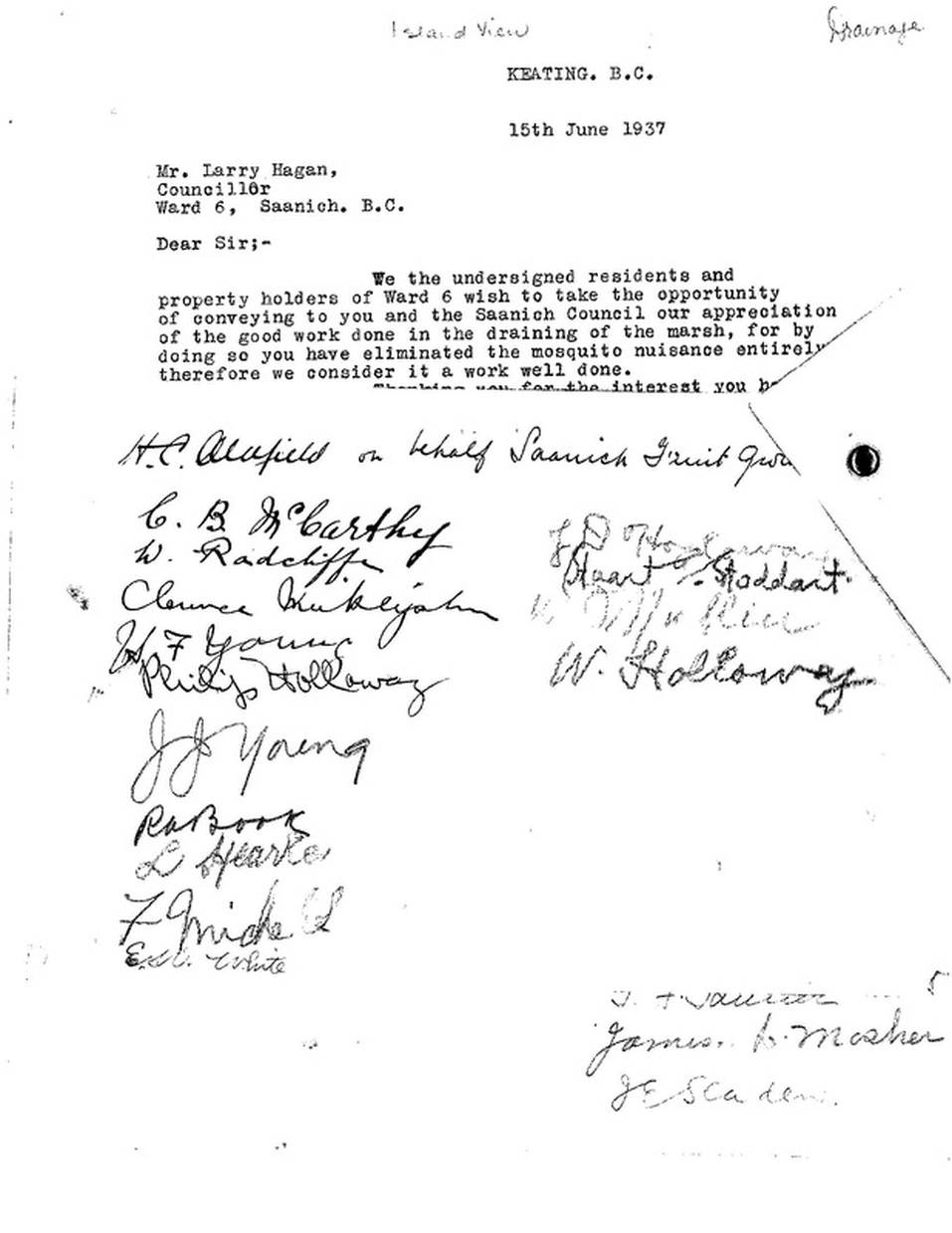 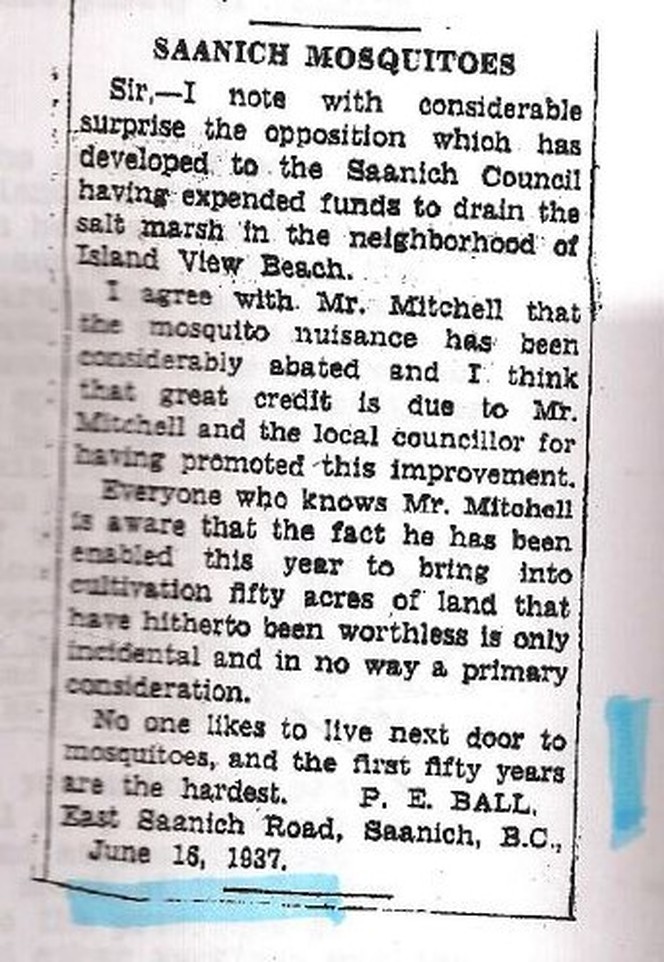 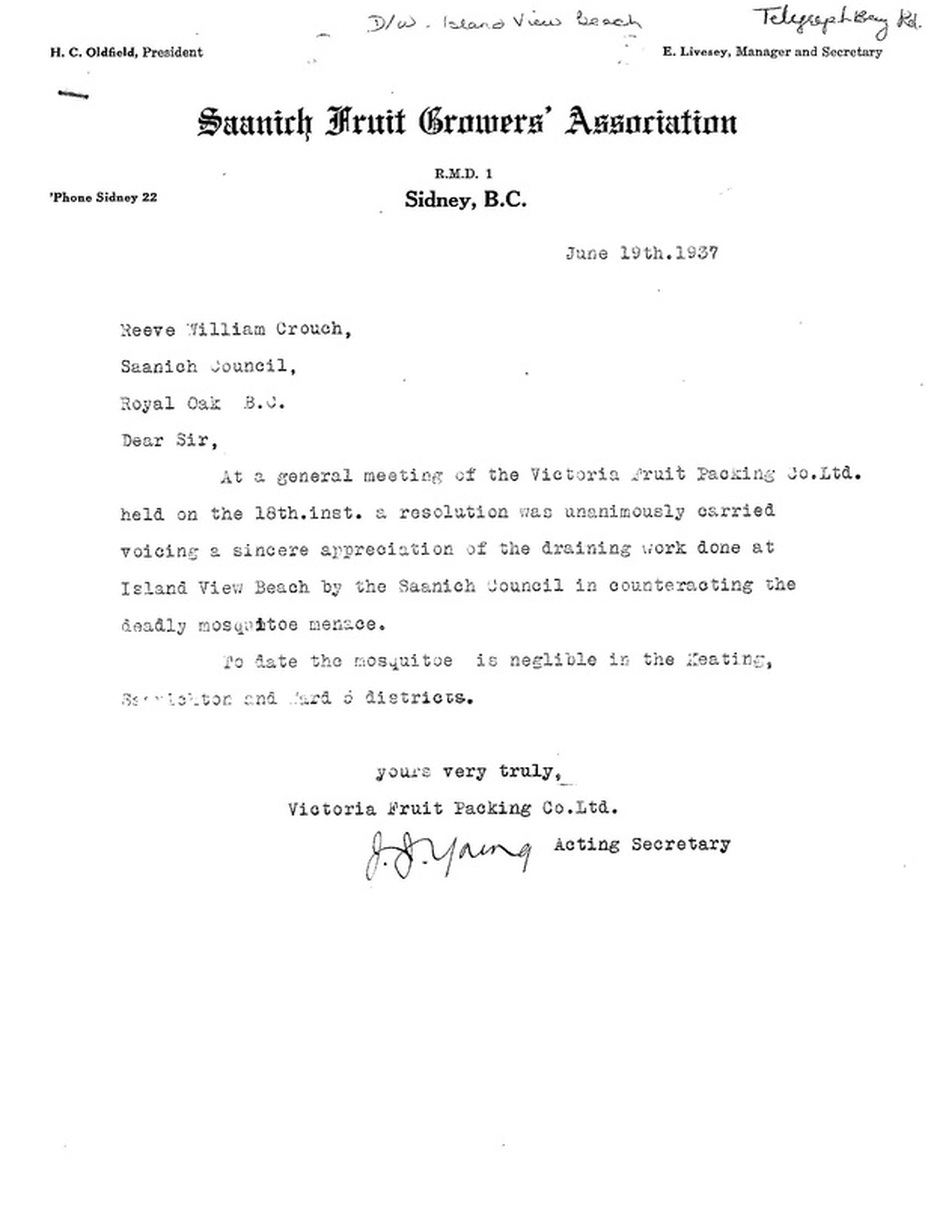 It is a tribute to the work of the Corporation of Saanich Engineer who designed and supervised this work in 1936, that a survey in 2011 showed the fall of the ditches still works although the ditches were neglected by the CRD for so long.  The surveyor in 2011 pushed a pole to the bottom of each ditch (as distinct from the top of the mud in the ditch).   Below is the a graph showing the elevation of the ditches and the elevation of the land.  The sea is to the right of the graph but notice that the route shown is a stepped one that moves north west to Puckle Farm.

​This is the route pf the graph: 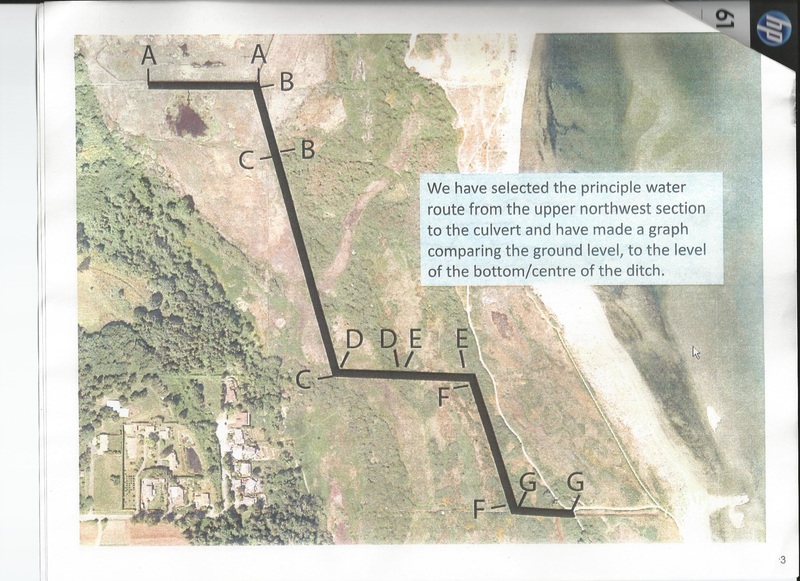 And here is the elevation graph of that route.  Notice that the route shown is only as far as the main inland footpath.  Although the graph shows the land rising, had the graph been taken to the sea wall that rise in the land height would have been much greater. 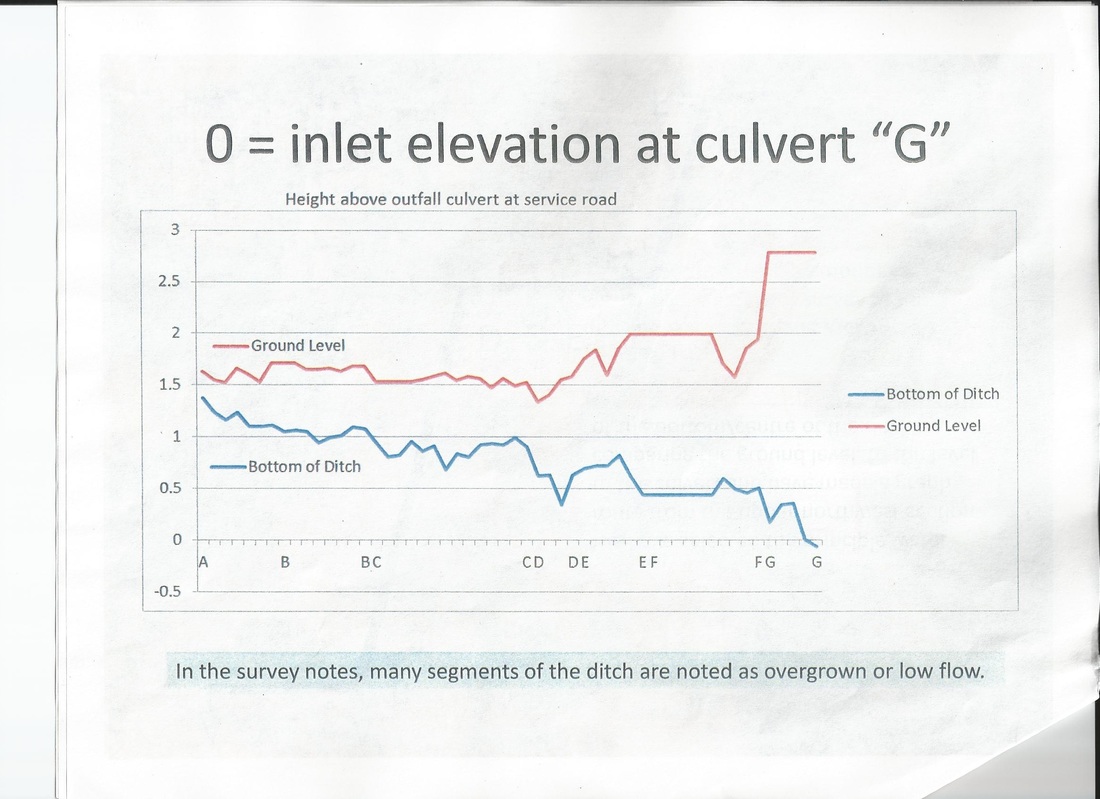